How the Left Misunderstands Free Markets 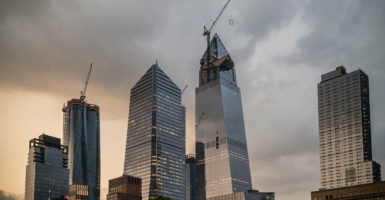 Luigi Bradizza, Ph.D., is an associate professor of political science at Salve Regina University and the author of "Richard T. Ely’s Critique of Capitalism" (Palgrave Macmillan, 2013).

How did our nation go from having a high-growth economy in the 19th and early 20th centuries, to struggling in recent years to achieve 3 percent annual growth?

The American economy today is mixed: It is partly free, vibrant, prosperous, and entrepreneurial and partly unfree, obstructed, and lethargic.

The free part is governed by the principles of our founding and the Constitution, which safeguard private property and contract rights that permit us to gain, hold, use, and dispose of property. Prices and wages are determined by supply and demand.

Individuals remain free to use their talents to improve their material circumstances in voluntary agreements with others, provided they do not directly violate the right to life, liberty, and property of other people. This legal structure has produced the most prosperous and innovative economy in human history.

The unfree part of our economy, by contrast, is caused by changes—many of which are still in place today—brought about by progressive thinkers and activists beginning in the late 19th century.

The Progressive Rejection of Free Markets

The progressive reaction against free-market economics originated during the Progressive Era, which lasted from about 1880 to 1920. At that time, reform-minded, progressive political economists rejected the free market and the limited government bequeathed to us by the Founding Fathers.

They argued that limited government was based on a false theory of natural rights and that private property and contract rights were therefore purely a creation of the government and not ours by nature.

They also said the free market led to a damaging selfishness that harmed ordinary citizens.

They viewed the free market as immoral because it harmed workers by underpaying and overworking them and, in general, by permitting the economically powerful to dictate harsh terms of employment to the economically weak. And they claimed that free markets amounted to laissez–faire economic anarchy that permitted few, if any, salutary economic regulations.

Progressives subordinated the discipline of economics to a moral ideal of redistributive social obligation and cooperation, with the goals of more widely distributed economic benefits. They wanted a massive increase in the scope, size, and power of the federal government. They wanted intrusive and elaborate economic regulations administered by a large bureaucracy, central economic planning, a redistribution of income from rich to poor, the minimum wage, unions, and much more.

It took decades of steady intellectual, political, and legal efforts for progressives to win their battle over limited government and the free market.

Why the Progressives Are Wrong

Though contemporary progressives say the theory of natural rights has been refuted, a small but vigorous intellectual cohort has argued for its return. Contemporary defenders of natural rights make the philosophic and moral argument that property belongs by nature to the person who creates it—and not to the government that merely protects it.

Critics of progressivism also call for a more nuanced understanding of the morality of self-interest in economics. Progressives routinely have blurred the moral difference between a morally defensible, rational self-interest and a narrow, grasping selfishness.

Progressive economic intervention aimed at supporting workers’ incomes by means of a minimum wage or forced unionization is not only imprudent, but also an unjust, immoral, and unconstitutional violation of property and contract rights.

Legislating in this area takes us beyond the proper limits of government power. If workers need income support, the responsibility should fall first on their family, friends, and community, and on government only as a last resort.

The progressive charge that free-market economics is un-Christian rested on a flawed understanding of Christianity. Americans can be good Christians if they support minimal public welfare and are privately generous to the less fortunate.

Despite a century of political success, interventionists have steadily failed to confront the strongest moral, theoretical, and practical arguments for free markets and against interventionism. Their failure provides an opening to advocates of economic liberty. We can recover the natural rights regime of the Founders and their successors.

When most Americans return to the belief that adults can be presumed to be able to take care of themselves and do not need protection against the alleged “exploitation” of the free market, we will have taken a large step toward recovering our economic liberty.