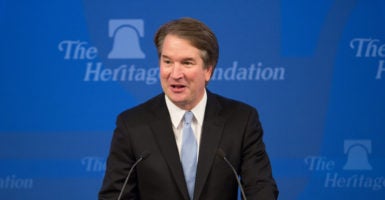 Judge Brett Kavanaugh's former clerks spoke at The Heritage Foundation about his approachability, his character and method for making decisions. (Photo: Willis Bretz for The Daily Signal)

When Sarah Pitlyk, a graduate of Yale Law School, was months away from starting her clerkship for Judge Brett Kavanaugh, she was worried if she would be able to balance this opportunity while being a mom to her 1-year-old son.

“I got a call from Judge Kavanaugh, and he just put it out there: You’re a mom coming to clerk,” said Pitlyk, who clerked for Kavanaugh on the U.S. Circuit Court of Appeals for the District of Columbia in 2010 and 2011.

She recalled Kavanaugh—now President Donald Trump’s Supreme Court nominee—saying, “Let’s figure out what we need to do to make the clerkship just as rewarding for you as it would be otherwise, and also to make it possible for you to be a mother while you’re doing it.”

“He asked for my ideas. He didn’t tell me what would work for me. He didn’t proscribe the best solution based on his infinite wisdom,” Pitlyk continued, speaking with other former clerks for Kavanaugh Thursday on a Heritage Foundation panel. “ … We made the accomodations I needed to see my son every day.”

Pitlyk is now the special counsel for the St. Thomas More Society, a religious liberty group.

Three other former Kavanaugh clerks joined her on the panel to talk about how they were impressed by how approachable their former boss was, as well as his character and method for making decisions.

“Judge Kavanaugh’s colleagues on the D.C. Circuit are diverse in their judicial philosophies. But, at least when I was there, they were not diverse in their views of Judge Kavanaugh,” said Rebecca Taibleson, who also clerked for Kavanaugh in 2010 and 2011. “Rather, their views of him were uniformly as a respected, collegial, valued colleague who works very hard, who is a straight shooter, and who is unfailingly polite and kind to his colleagues.”

Taibleson is now a prosecutor in Milwaukee.

“Similarly, he’s hired law clerks from across the ideological spectrum. He values dissent, disagreement, and banter in chambers,” Taibleson said. “He follows along a careful process in deciding what he thinks about a case. He is open to dissent and banter and that process. That being said, I should say, on the few occasions I did disagree with him, I never actually managed to budge him.”

Before the Citizens United case, Martinez noted that in one case, he sided with the First Amendment rights of a liberal group that raised money for pro-choice Democratic candidates. In another election case, the judge cited existing precedent in ruling against Republican litigants, Martinez said.

“Judge Kavanaugh has often sides with plaintiffs who espouse conservative positions, but he’s also often sided with plaintiffs who espoused non-conservative positions,” Martinez said. “He’s rejected a couple of challenges to the Affordable Care Act statutes, something a lot of Republicans weren’t happy with. He’s upheld agency actions. At the same time, he’s struck down agency actions when he thinks agencies go beyond their authority.”

“In the midst of a very contentious debate over Judge Garland’s nomination, Judge Kavanaugh went out in public. He wasn’t going to take a position on whether to confirm or not confirm anyone,” Martinez said. “But he thought the right thing to do in that circumstance was tell people he thought Judge Garland was one of his heroes, that he thought he was supremely qualified and he wasn’t going to say anything bad about Judge Garland. I’m not sure everyone would have done that.”

Porter Wilkinson Wall, who clerked for Kavanaugh in 2007 and 2008, recalled how impressed she was that he spent so much time determining cases.

“When I went to chambers as his young law clerk I was just struck by how humble he was in approaching his job. In law school, you study judicial opinions,” said Wall, a graduate of the University of Virginia School of Law, who is now working in private practice in Washington, D.C. “You read case after case after case and analyze and study them. So you come away with the impression that judges know all the answers and that their opinions are just imparting their wisdom to you and they are a fountain of knowledge.”

“I went into Judge Kavanaugh’s chambers and just so struct by the way he approached cases,” she added. “He didn’t pretend to know the answers. He didn’t come at cases with particular personal or policy views. He just worked hard to find out what the answer was. For him, that meant reading the briefs and finding the best strength and weaknesses of both sides’ arguments. … At oral argument, he would press both sides. He wouldn’t come predisposed to make one lawyer look bad or just get the answers he wanted.”