The Political Pasts of the Lawyers Representing Kavanaugh Accusers 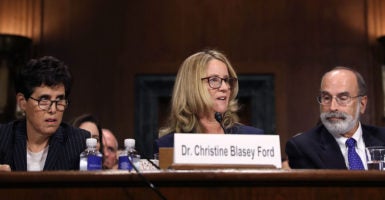 Christine Blasey Ford is joined by her lawyers, Debra Katz, left, and Michael Bromwich as she testifies Sept. 27 before the Senate Judiciary Committee. Katz and Bromwich both have partisan pasts. (Photo: Win McNamee/Zuma Press/Newscom)

The lawyers for the three women accusing Supreme Court nominee Brett Kavanaugh of sexual misconduct all have been on the legal battlefields of either celebrity or politics.

One ran for office multiple times as a Democrat. Another was a federal appointee of both Presidents Bill Clinton and Barack Obama. Still another defended the alleged misconduct of Democrat politicians.

Kavanaugh has denied allegations made by each woman.

Here’s a look at the political pasts of the lawyers representing the accusers in one of the most politically charged Supreme Court confirmation processes in recent times.

Michael Bromwich is one of the lawyers for Christine Blasey Ford. Bromwich and another lawyer, Debra Katz, sat on either side of Ford during the Sept. 27 hearing by the Senate Judiciary Committee.

A vicious, vile and soulless attack on Dr. Christine Blasey Ford. Is it any wonder that she was terrified to come forward, and that other sexual assault survivors are as well? She is a remarkable profile in courage. He is a profile in cowardice. https://t.co/UJ0bGxV1EZ

Ford claims that in the early 1980s, during a small gathering of teens, a drunken Kavanaugh pinned her to a bed and forcefully tried to remove her clothing.

Before going into private practice, Bromwich was a prominent federal prosecutor.

In the 1980s, he served as associate counsel for the Office of Independent Counsel during its investigation of the Iran-contra affair.

He was one of three courtroom lawyers leading the prosecution against Lt. Col. Oliver North, then a National Security Council aide. North’s conviction was overturned on appeal in 1990.

In 1994, Clinton nominated Bromwich and the Senate confirmed him as inspector general for the Justice Department. The Office of Inspector General acts as the internal watchdog to investigate waste, fraud, and abuse, and in some cases, make a criminal referral.

A little over a decade later, Obama tapped Bromwich to lead an effort to reform the Minerals Management Service in response to the Deepwater Horizon explosion in 2010 off the Gulf of Mexico.

Bromwich oversaw reorganization of the agency to eliminate conflicts among its different missions, which included establishing safety standards, regulating industry compliance, and collecting royalties, according to the Obama White House.

Starting this year, Bromwich began representing Andrew McCabe, who had been deputy FBI director under James Comey since 2016 and, for a short time after President Donald Trump fired Comey, was the acting FBI director.

McCabe’s wife, Jill McCabe, ran an unsuccessful campaign for state Senate in Virginia, receiving about $500,000 from a political action committee run by then-Gov. Terry McAuliffe, a political ally of Bill and Hillary Clinton.

The FBI’s Office of Professional Responsibility recommended that McCabe be fired. Attorney General Jeff Sessions followed up by firing him.

Bromwich did not respond to email and phone inquiries.

Debra Katz has hit the talk show circuit, speaking up for Ford’s allegations more than Bromwich has. And she is no stranger to commenting for the media.

“Context is relevant,” Katz said about Franken. “He did not do this as a member of the U.S. Senate. He did this in his capacity of someone who was still functioning as an entertainer.”

In the 1990s, Katz was also a strong defender of Bill Clinton amid charges of sexual harassment made by Paula Jones.

Clearly a one-time incident that took place in 10 to 12 minutes, she was not forced to have sex, she left on her own volition, the courts increasingly are finding that that is not enough to create a sexually hostile work environment claim.

Katz also talked about the Jones case to The New York Times in March 1998.

“If a woman came to me with a similar fact pattern, that is someone in the company above her propositioned her but only once and she suffered no tangible job detriment, I would probably tell her that I’m sorry, it’s unfair, but you don’t have a case,” Katz told the Times.

Clinton eventually settled his case with Jones, and was found in contempt of federal court.

In a follow up point in the Times, Katz continued: “If it’s one time, it has to be severe, almost a sexual assault, not just a touching of somebody’s breast or buttocks or even forceful kissing.”

Katz is a donor to Obama’s presidential campaigns and Hillary Clinton’s 2016 campaign, and to numerous Democratic congressional candidates across the country.

In a Facebook post in March 2017, Katz, referring to a Hillary Clinton line during the campaign, said of advisers to President Donald Trump: “These people are all miscreants. The term ‘basket of deplorables’ is far too generous a description for these people who are now Senior Trump advisors.”

Katz did not respond to phone and email inquiries.

While most of the lawyers involved in the Kavanaugh accusations have a past in politics, Michael Avenatti hints at a significant political future.

Avenatti already has asserted that he is considering running for president in 2020.

Over the past year, he has built a high-profile legal resume to raise his name recognition, making well more than 100 TV appearances.

One of his clients, Julie Swetnick, made the most serious accusation against Kavanaugh—one that the nominee and current D.C. Circuit Court judge called a farce.

Swetnick claims in an affidavit that when she was a young adult, she was present at multiple parties where Kavanaugh, as a high school student, participated in gang rapes.

She said that she eventually was gang-raped at one of the parties she attended. She said she couldn’t remember whether Kavanaugh was one of her attackers—only that he was present at that party.

While in college and later in law school, Avenatti worked for Rahm Emanuel’s Democratic-affiliated opposition research firm the Research Group. Emanuel is now mayor of Chicago.

However, most of Avenatti’s career has been with the entertainment industry in Los Angeles, where he once sued businessman Trump.

Deborah Ramirez claims that as a college freshman Kavanaugh exposed himself to her during a party when they were both students at Yale.

The two lawyers representing her, according to reports, are Stan Garnett and John Clune, both of Colorado.

Garnett is a former district attorney for Colorado’s 20th Judicial District in Boulder County, an elected office he held for about a decade, according to an online biography.

In 2010, Garnett was the Democratic nominee for Colorado attorney general. He lost the race to Republican John Suthers.

In private practice during 2003, Garnett represented Rep. Mark Udall, D-Colo., in his capacity as an individual in the case of Salazar v. Davidson, which led to a court’s striking down a redistricting plan approved by a Republican-led state legislature.

He contributed to Democratic congressional candidates across the country, and also to Clinton’s 2008 presidential campaign.

Clune, also an attorney for Ramirez, hasn’t been as transparently political as most of the other lawyers involved in the allegations against Kavanaugh.

Many of his high-profile cases involve sexual assault, however.

Clune has represented students and families on campus rape and Title IX matters.

Debbie Ramirez spoke to the FBI for over two hours this past Sunday. It was a detailed and productive interview, and the agents were clearly motivated to investigate the matter in any way they were permitted. Ms. Ramirez identified a number of witnesses, and, 1/

at the end of the interview, her lawyers provided the FBI the names and known contact information of additional witnesses (totaling more than 20) who may have corroborating information. Although we do not know the status of the investigation, 2/

we are not aware of the FBI affirmatively reaching out to any of those witnesses. Though we appreciated the agents who responded on Sunday, we have great concern that the FBI is not conducting—or not being permitted to conduct—a serious investigation. 3/

In 2009, Clune co-founded and served as the first legal director for Rocky Mountain Victim Law Center, a pro-bono nonprofit organization dedicated to enforcing the rights of crime victims, according to an online biography.