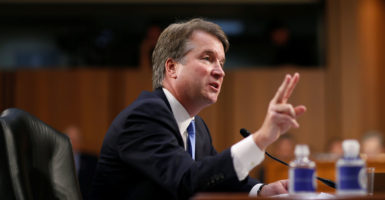 Judge Brett Kavanaugh has been praised by liberals and conservatives alike as a “brilliant jurist” who is an extraordinary choice to serve on the Supreme Court. (Photo: Joshua Roberts/Reuters/Newscom)

Sen. Thom Tills is a Republican senator of North Carolina.

The Senate Judiciary Committee is holding hearings this week to review the nomination of Brett Kavanaugh, an eminently qualified jurist to serve on the Supreme Court.

When Kavanaugh, a long-serving federal appeals court judge, was first nominated, Senate Judiciary Committee Chairman Chuck Grassley, R-Iowa, committed to every member that we would have the most open, fair, and transparent nomination process ever, a commitment that I believe he has kept.

Under Grassley’s leadership, Kavanaugh’s nomination has resulted in the most extensive confirmation process for a Supreme Court nominee in history.

The Judiciary Committee has received the most comprehensive set of documents ever provided by a nominee to the Supreme Court, receiving more executive branch documents than the past five Supreme Court nominees combined.

These documents are in addition to the most relevant portion of Kavanaugh’s extensive record; namely, the 307 opinions he authored as a judge on the U.S. Court of Appeals for the District of Columbia Circuit. That court is widely considered to be the second-most important court in the nation, behind only the Supreme Court itself.

Despite a complete and comprehensive review of his record and his insight into the most substantive legal issues facing this country, Senate Democrats continue to create faux outrage over irrelevant documents instead of working with the chairman in good faith.

Senate Democrats are demanding millions of additional pages of documents, dating back to Kavanaugh’s tenure as President George W. Bush’s staff secretary, though it doesn’t appear to matter that these documents shed little insight into Kavanaugh’s legal thinking or that they are subject to executive privilege because of their sensitive nature.

When Judiciary Committee Democrats received 170,000 pages from Elena Kagan, nominated by President Barack Obama to the high court in 2010, then-Chairman Patrick Leahy, D-Vt., called it “an unprecedented volume of materials.”

There was actually more Kagan material in existence, but both parties agreed not to demand Kagan’s documents as then-solicitor general, owing to their sensitive nature, even though they were highly relevant to her judicial philosophy—particularly since Kagan had no legal opinions to review.

But times have changed for Senate Democrats. Why are they dropping the Kagan standard and adopting a double standard, demanding millions of additional documents that are both deeply sensitive and largely irrelevant?

The reality is Senate Democrats know they lack any basis to oppose Kavanaugh, so they have turned to hypocritical requests for irrelevant documents and have engaged in hyperbole to describe Kavanaugh’s nomination as the end to policy outcomes they support.

Kavanaugh’s rulings aren’t meant to be for or against a particular policy outcome, aren’t meant to be a commentary on politics or public policy, or reflect his personal views or morality. His opinions simply order the outcome the law—as passed by Congress—dictates. Nothing more, nothing less.

He understands that a judge is supposed to be an umpire. Someone who applies the rules of the road fairly and uniformly, and doesn’t change the rules in mid-game.

My review of Kavanaugh’s record persuades me that he is not only one of the most eminently qualified individuals ever to be nominated, but that he also understands the appropriate and proper role of a judge in our federal system. In Kavanaugh’s opinions, he has time and time again reached the conclusion dictated by the law, not by his personal policy preferences.

Kavanaugh has been praised by liberals and conservatives alike as a “brilliant jurist” who is an extraordinary choice to serve on the Supreme Court.

He has received the highest rating from the American Bar Association unanimously, an evaluation that Schumer once described as “the gold standard by which judicial candidates are judged.”

If his qualification were still in doubt, the Supreme Court has upheld Kavanaugh’s legal position in 13 cases.

Kavanaugh, an impeccably qualified mainstream jurist who interprets the law as it is written, knows the role of the Supreme Court.

I have no doubt that during this week’s hearings, anyone who looks at Kavanaugh’s record objectively is going to be hard-pressed to find that he doesn’t have the experience needed to be a justice on the Supreme Court.

I look forward to working with my colleagues in the Senate to ensure he is confirmed in the coming weeks.