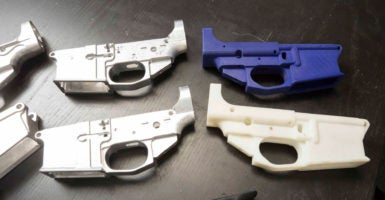 Last Tuesday, President Donald Trump tweeted, “I am looking into 3-D Plastic Guns being sold to the public. Already spoke to NRA, doesn’t seem to make much sense!”

The White House has not offered any clarification on what exactly Trump’s tweet meant, but if he is worried about plastic guns being sold to the public, he shouldn’t be. The Undetectable Firearms Act of 1988 already makes the sale, and even the mere possession, of plastic guns illegal.

Following Trump’s tweet, however, Sen. Bill Nelson, D-Fla., went to the Senate floor and tried to pass a bill by unanimous consent (meaning there would be no roll call vote, the bill would just pass the Senate immediately without any debate) that would have banned the mere publication of any designs for a plastic gun that could be produced by a 3D printer.

I objected. Anytime legislation begins with words “It shall be unlawful for any person to intentionally publish … ” I will force the Senate to take a long look at that legislation.

The federal government already believes it has the power to ban the publication of 3D plastic gun designs under the Arms Export Control Act and it has been selectively enforcing this ban on a company called Defense Distributed since 2013. Other entities have published 3D plastic gun designs on the internet for years, but the federal government has been locked in a legal dispute with Defense Distributed since 2015.

But the federal government has been losing this legal battle. That is why the State Department entered into a settlement with Defense Distributed this July that allowed them to publish their 3D plastic gun designs.

Nelson’s ban would be just as unconstitutional as the State Department ban.

“There are many limits on our First Amendment rights of speech,” Nelson claimed Tuesday. “You cannot say ‘fire’ in a crowded theater,” he explained.

Nelson may want to read up on his First Amendment case law. Justice Oliver Wendell Holmes’ quote, “The most stringent protection of free speech would not protect a man in falsely shouting fire in a crowded theater,” comes from the case U.S. v. Schenck where the Supreme Court upheld the conviction of man distributing pamphlets opposed to the draft during World War I.

Schenck was a shameful decision. And it has since been overturned by Brandenburg v. Ohio where the Supreme Court held a member of the KKK could not be convicted for his hateful speech. Unless speech “is directed to inciting or producing imminent lawless action and is likely to incite or produce such action” the government cannot ban it, the court ruled.

This is the right standard. There are literally hundreds of gunsmithing books for sale on Amazon right now. Does Nelson want to ban all those books too?

Undetectable plastic guns are a danger. That is why the production and possession of them has been illegal for 30 years. But just publishing a design for such a gun is not the same as having such a gun.

We cannot censor speech. That is why I objected to Nelson’s bill Tuesday and it is why I will continue to fight for the First Amendment.