Our Pilots Deserve Absolute Air Superiority. They Need the F-35. 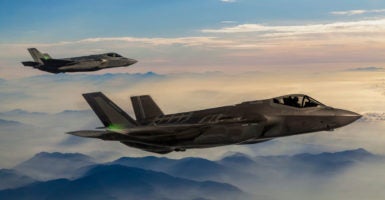 Lt. Col Gene Smith, USAF (ret.), joined the Air Force in 1956 and served as a fighter pilot. He flew 33 missions in Vietnam before being shot down. He then spent 5 1/2 years as a prisoner of war. He now lives in West Point, Miss.

America’s history is filled with far too many instances where our military personnel were forced to rely on extraordinary bravery and sacrifice to make up for having inadequate and obsolete weapons and equipment.

While we honor such dedication to duty, we owe our military better.

That is why there should be serious concern about any potential cutbacks to the F-35 fighter program—either by diverting precious funds to costly and unproven concepts or by continuing to spend money on fighters whose designs, in some cases, date back to the end of the Vietnam War.

This is an issue I take personally. On Oct. 25, 1967, I strapped into my F-105 Thunderchief fighter-bomber and took to the sky on my 33rd combat mission to strike a bridge in the middle of Hanoi, North Vietnam.

I never made it back to base. Struck by enemy fire over the target, I was held prisoner for the next five and a half years. Torture, isolation, and near constant abuse defined my existence.

The airplane I was flying was truly an impressive machine when it came to speed and looks. However, it was wholly unsuited for the missions assigned to me and other pilots. A product of the 1950s, the Thunderchief was specifically designed to deliver nuclear weapons against Soviet forces should war ever break out in Europe.

That was a far cry from the sorties we executed in Vietnam. Ultimately, half of the F-105s ever built were shot down, including my own.

After Vietnam, the Air Force leadership internalized this lesson to the core. Far better designs and cutting-edge technologies like stealth and precision weapons defined the future of the service. The results of these deliberate investments have proven most impressive, with American air crews having operated with unparalleled effectiveness over the ensuing decades.

Fighters like the F-15, F-16, F/A-18, and Harrier are no longer able to execute their missions when pitted against modern air defenses. As a good friend and former chief of staff of the Air Force once said when asked why we needed these new types of aircraft: “When you are in the jet and are doing what your country asked you to do, you don’t want it to be a fair fight.”

Failing to accept this advice will lead us down the road of lives lost, air crews held captive, and strategic objectives left unmet.

That is precisely why the Air Force, Navy, and Marine Corps have sought to develop the F-35 to replace their legacy types. Built with vital stealth technology necessary to help circumvent enemy defenses, in addition to powerful sensors and computing power required to operate in the information age, this aircraft is not an optional item for the country.

While I understand frustration regarding some of the cost and schedule problems facing the program in the past, I also know from firsthand experience that such issues pale in comparison to going to war with outdated, inadequate equipment.

I also know that all new weapons systems suffer their fair share of teething problems. One of the proposed alternatives—buying more F-15s and other Cold War-era fighters, will not work.

Those aircraft are based on a 40-year-old design and would not survive for long against the air-defense systems fielded by Russia and China today, not to mention those of tomorrow.

We have been down this road before and must not do so again.

Our country’s top leaders—ranging from the president to members of Congress, and the military service chiefs—spend a lot of time at Joint Base Andrews as they travel around the world on official business.

If they look across the ramp, they will notice a Thunderchief standing as a memorial. Every time I look at that jet, I am taken back to the perilous skies over Vietnam and the memories of those who gave everything for the country.

Reflecting upon that legacy, one thing is clear: Investments in programs such as the F-35 will make the difference between success and failure for those following in my footsteps.