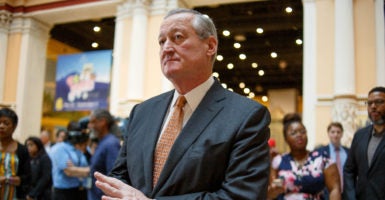 “It’s truly shocking that the mayor was willing to end a contract that was actually helping to keep our community safe,” White said on “Fox & Friends” Monday.

“Federal immigration officials were using this PARS [Preliminary Arraignment Reporting System] to access information about people who were previously arrested — who committed a crime other than being here illegally.”

ICE issued a statement to express its disappointment with Kenney’s decision and said it would continue with its mission, despite efforts to “obstruct” its activity.

ICE is deeply disappointed with the city’s decision … Despite these attempts to obstruct ICE’s lawful efforts to apprehend criminal aliens, the agency remains committed to its efforts to uphold public safety in the city of Philadelphia.

White criticized Kenney for supporting the abolition of ICE and claimed he never provided an alternative system or an explanation of his beliefs.

“I think [Kenney] actually stated that he wanted to abolish ICE and he didn’t even provide any kind of explanation as to why he was willing to just completely get rid of it entirely and not replace it with any alternative or do reforms,” she concluded.

“It was merely just a statement, obviously, to cater to folks who aren’t necessarily the majority of Philadelphia.”