On Freedom and a Fourth of July Abroad 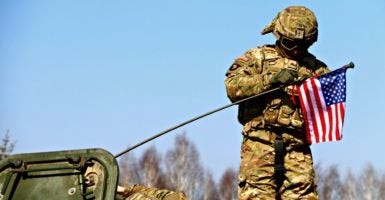 A U.S. Army soldier is happy to fly the colors in the Baltics during Operation Dragoon Ride, which attracted thousands of supportive Estonians, Latvians, and Lithuanians. (Photo: Nolan Peterson/The Daily Signal)

PARIS—This will be my second consecutive Fourth of July spent outside the United States.

Last year, I celebrated our nation’s birthday in Mariupol, Ukraine. It’s a city only a few miles from the front lines of the still-simmering war in Ukraine.

The war was still there, only a few miles away. We could get to it in a 20-minute car ride. Ukrainian soldiers like these two, near the front in eastern Ukraine, tend to be fans of America. (Photo: Nolan Peterson/The Daily Signal)

The occasional thud of a mortar or artillery round from nearby Shyrokyne filled in for the fireworks. Audible reminders that Ukrainian soldiers were (and are) still fighting to achieve the things we celebrate every Fourth of July—freedom, democracy, and a chance to pursue happiness.

It’s almost ritual to express gratitude for the American way of life, or to thank a veteran or a soldier on holidays like Independence Day. The rehearsed nature of it all isn’t the result of insincerity; it’s just that many of us living in the United States have never tasted the alternative.

We’ve never actually lived in a place that isn’t free—a place like eastern Ukraine where families still die in the night from Russian artillery. Seeing such things makes you want to kiss the ground when you finally come back home.

Celebrations in war always seem more passionate. There’s a little bit of that end-of-days feeling like it’s officially time to eat, drink, and be merry for tomorrow isn’t a given. It was like that in Mariupol last year.

One year later, the war hasn’t ended. Ukraine is still waiting for that tomorrow. Artillery and small arms are still fired in anger every day along the hundreds of miles of trenches and fortified checkpoints spread throughout the Donbas. Soldiers in opposing camps still peer at each other across no man’s land. It’s still a war. People are still dying.

Yet, I retain hope Ukraine will one day celebrate its Independence Day like we do. One day the explosions will be from fireworks and not weapons of war. This woman with the American flags was among thousands of civilians who came out to welcome a U.S. Army Stryker convoy traveling across the Baltics. (Photo: Nolan Peterson/The Daily Signal)

This past year I visited Tibetan freedom fighters living in exile in India and Nepal, veterans of a secret CIA-backed guerrilla campaign against China during the Cold War.

A common thread united these disparate bands of soldiers divided by culture, history, and geography. For all of them, the United States symbolized what they were fighting for.

Some of the Ukrainian soldiers I met on the front lines wore American flags on their uniforms. For Ukrainians, the U.S. flag long had been a symbolic pushback against the Soviet Union and the Kremlin’s authoritarian rule.

And now, 25 years after the fall of the USSR, as Ukraine again finds itself on the receiving end of Russian aggression, some have turned to symbols of America once more as a way to represent their independence and annoy their enemies.

I met one Ukrainian soldier at a machine gun nest in the trenches who wore a Ronald Reagan Presidential Library T-shirt. I asked why he was wearing that shirt in combat. He told me: “Because Reagan won the Cold War, and it would piss Putin off.” The Tibetan freedom fighters I met, now old men living in solitude in lonely Himalayan villages, told me U.S. military support inspired them to fight back against China’s invasion and genocide.

These soldiers, many of whom were former Buddhist monks, fought the mechanized might of China’s People’s Liberation Army while on horseback and with World War I rifles.

“I have a deep appreciation and a great respect for America,” Sonam Dorjee, an 81-year-old former Tibetan resistance fighter told me during an interview last year in McLeod Ganj, India.

This May, I embedded with Kurdish peshmerga soldiers on the front lines outside Mosul. I saw smiles creep over the Kurds’ faces as U.S. warplanes pummeled Islamic State fighters a couple miles away across no man’s land.

For the older peshmerga soldiers, the sound of U.S. jets held special significance. They remember how Saddam Hussein’s warplanes used to inspire terror.

Before a U.S.-led coalition deposed him, the Iraqi dictator killed hundreds of thousands of Kurds from the air with chemical weapons and conventional bombs in operations such as the genocidal al-Anfal campaign.

Now, the peshmerga rejoice at the sound of jet engines, knowing the crackling roar symbolizes their American ally punishing the enemy. “We will be friends with America forever for the help they’ve given us,” peshmerga Gen. Omar Hama Ali Farag told me on the front lines outside Mosul. He went on:

We had the Anfal genocide and many sufferings, but the peshmerga have always seen America as our friend. We could have never gotten rid of Saddam without George W. Bush. And we can never have our independence without America’s help.

Our country’s flag and the men and women who wear it on their uniforms are still seen as a force for good in many places around the world.

That was evident in February as I traveled with a U.S. Army Stryker convoy across the Baltics. The convoy, called Dragoon Ride, was meant to show U.S. resolve to defend NATO’s Baltic members from Russia.

Along the way, thousands of Estonians, Latvians, and Lithuanians lined the roads waving American flags to welcome our troops.

Fathers had children on their shoulders. Young women blew kisses to the troops. At each stop, in each little village, hundreds of local people gathered to take selfies with the American soldiers and shake their hands.

I wish you could have seen it; it would have made you proud to be an American.

Maintaining a dominant military with a global presence is not just about quantifiable metrics of national defense or international stability. Our military is also the torchbearer for our country’s values and a beacon of hope for people in times of peril.

On the Fourth of July we celebrate the achievement of a dream that, whether we know it or not, still serves as a North Star to people around the world brave enough to fight for a better life.