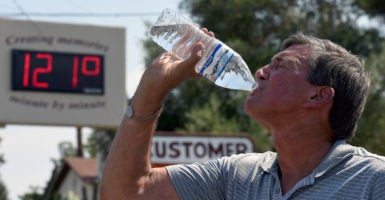 John Rinehart takes a drink of water near a thermometer as the temperature hits 121 degrees in Phoenix, Arizona, June 20, 2017. A heat wave has gripped the Southwest. (Photo: Art Foxall/UPI/Newscom)

A July study claims that thousands more people will commit suicide in the coming decades due to man-made global warming.

Published in the journal Nature Climate Change on Monday, the study found a 1-degree increase in average monthly temperature correlated with suicide rate increases of 0.68 percent and 2.1 percent in the U.S. and Mexico, respectively.

The effect it found is extremely small, and in some cases, not statistically significant from zero. Still, the results were touted in media reports as evidence that increased temperatures exacerbate suicides.

The study predicts between 9,000 and 40,000 more people will off themselves by 2050 because of man-made warming—based on an extreme warming scenario that experts increasingly call “exceptionally unlikely.”

“We find a very consistent relationship between temperature increases and increases in suicide risk,” said Burke, an assistant professor at Stanford University.

A lot of research has been done into suicide rates and temperature. A recent British study found that heat waves exacerbated existing mental health problems in individuals, including suicide.

But Burke’s study only looked at average monthly temperature, which does not give an indication of heat waves or other phenomenon that could exacerbate suicides. Higher average temperatures in any given month could be from warmer nights, rather than scorching daytime temperatures.

The suicide and climate change study correlates "monthly average temperature" with suicide risk — and then projects from RCP 8.5 models into 2050 — with "social media" postings

P-hacking refers to the reanalyzing of data until a statistically significant result is achieved. It’s become a major concern in recent years among scientists who fear the practice is damaging their credibility and leading to the hyping of bad science.

Burke’s study averaged monthly temperature correlations across the U.S., which also obscured negative relationships between suicides and temperature increases. Nevada and South Carolina, for example, saw decreases in suicide rates as temperatures increased, but those decreases are obscured in the national average.

The study also claims that temperature increases correlated with a less than 1 percent increase in “depressive” language on Twitter. However, those results were only significant in one coding, which then had to be adjusted for “lagged effect.”