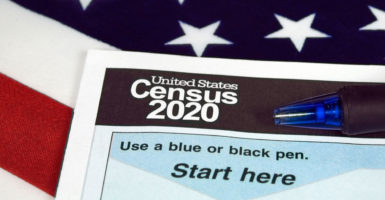 “From 1970 to 2000, the long-form census—sent to a segment of the population—inquired about citizenship,” according to the report. (Photo: liveslow/Getty Images)

A new report from House Republicans shows a citizenship question appeared on the U.S. census in one form or another for nearly 175 years, and argues that its addition to the 2020 census should not be controversial despite Democrats’ objections.

“Every decennial census from 1820 to 1950 inquired about citizenship,” the minority staff report released Thursday by the House Committee on Oversight and Reform says, adding:

From 1970 to 2000, the long-form census—sent to a segment of the population—inquired about citizenship. Since 2005, the Census Bureau has asked 3.5 million Americans about their citizenship every year.

“This report analyzes the history of the citizenship question and demonstrates that Democrats’ efforts to sow fear and controversy around its reinstatement are without any merit beyond scoring political points,” the minority committee staff says in a press release.

Mike Gonzalez, a senior fellow at The Heritage Foundation’s Allison Center for Foreign Policy, said 1950 was the last time the government asked the citizenship question on the “short form” census that goes to all American households.

After 1950, the citizenship question “migrated to the long form that went to a select group of households,” Gonzalez said.

“When the long form was replaced by the American Community Survey—which is sent every year to about 3.5 million households across the country—in 2006, the question then migrated to the ACS,” Gonzalez added.

The long-form questionnaire “provides socio-economic detail needed for a wide range of government programs and federal requirements,” according to Census.gov.

The Supreme Court will hear arguments this month on including the citizenship question in the 2020 census, bypassing an appeals court hearing, with a ruling expected in June, The Daily Signal previously reported.

Congressional Democrats have fought Commerce Secretary Wilbur Ross on his decision to restore the citizenship question to the census.

“Everything about adding the question doesn’t pass the smell test,” Rep. Jimmy Gomez, D-Calif., told NBC News. “I want to really get to the bottom of that.”

Some, including Rep. Elijah Cummings, D-Md., chairman of the Oversight and Reform Committee, have called the citizenship question unconstitutional.

“The key question we will ask Secretary Ross today is, what was he hiding from the Congress?” Cummings said March 14 during a committee hearing on the citizenship question. “What’s the real reason that the Trump administration wanted to add this unconstitutional citizenship question?”

The report from the committee’s Republican staff is titled “Democrat Fear-Mongering on the Citizenship Question: Gathering Census Information About Citizenship Is Not New and Should Not Be Controversial.”

The report notes that Rep. Michael Cloud, R-Texas, addressed the constitutionality question with Ross during the March hearing.

“There’s been an argument that this question is unconstitutional, yet we’ve used it several times over the last 100 years and it’s not been brought into question before,” Cloud said. “Is that correct?”

Ross responded: “Oh, it’s been used multiple times over the last 120 years, and the exact wording of this [question] is what’s been used each year on the ACS.”

The report from committee staff “demonstrates that we’ve had a long history of asking a citizenship question on the census and the claim that it is somehow unprecedented or unconstitutional has no basis in fact or law,” Hans von Spakovsky, a senior legal fellow at The Heritage Foundation’s Meese Center for Legal and Judicial Studies, told The Daily Signal in an email.

The report lists myriad ways that state and federal institutions use citizenship questions to gather information, among them:

The report also notes that federal law permits the commerce secretary to choose questions for the decennial census, as long as the secretary “meets certain statutory deadlines.”

A question about citizenship on the census shouldn’t be remotely controversial, Gonzalez told The Daily Signal in an email.

“The basic unit of a democracy is the citizen,” Gonzalez said, adding:

A republic should not take account of any other category, whether racial, ethnic, or sexual, when it considers rights and responsibilities. Citizenship bestows rights and responsibilities, and citizens vote in governments. Why anyone would want to ask questions on race and ethnicity in the census, but fear questions on citizenship, is beyond belief.

>>> Commentary: Trump Must Go to the Mat Over Liberal Judge’s Ruling on Census Question