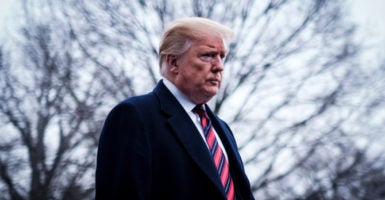 A federal judge ruled against the Trump administration's decision to include a question about citizenship on the 2020 census. (Photo: Pete Marovich/Stringer /Getty Images)

A Manhattan district court judge earlier this week blocked the Trump administration from adding a question on citizenship to the 2020 census, and in doing so has sought to weaken executive power while strengthening the administrative state.

The Trump administration has one choice here: Overturn this judicial overreach through appeal.

The decision was biased and based on selective evidence. It needs to be overturned and corrected at once.

As Judge Jesse M. Furman of the Southern District of New York himself observed in his ruling, “Time is of the essence because the Census Bureau needs to finalize the 2020 questionnaire by June of this year.”

The administration must therefore seek a stay at the U.S. Court of Appeals for the 2nd Circuit, and if that fails, go straight to the Supreme Court for an expedited review.

Furman, an Obama appointee, bought into the plaintiffs’ arguments that the citizenship question would lead to an undercount of illegal residents—and Hispanics in general—despite the lack of evidence supporting that claim.

It is important to note something that seemed to not occur to the judge: The question the administration wants to add to the census does not ask if someone is in the country illegally. It simply asks if the individual is a citizen.

It defies common sense for the judge to believe that a high percentage of aliens residing in this country illegally would fill out the census in the first place, while aliens who are here legally, never mind the country’s citizens—no matter where they were born—would have no reason not to fill out the census form.

In his opinion, the judge selectively recited the long history of a citizenship question on the census, which first occurred in 1820, but failed to mention that there is no evidence that it has led to an undercount on the American Community Survey, which is sent out by the Census Bureau every year.

As the judge himself observed, Commerce Secretary Wilbur Ross’ decision to add the citizenship question is “not inconsistent with the Constitution.” He also had to admit that the plaintiffs “did not carry their burden of proving that Commerce Secretary Wilbur Ross was motivated by invidious discrimination and thus that he violated the equal protection component of the due process clause.”

That was one of three legal conclusions the judge reached.

Another conclusion was that among the plaintiffs who had legal standing to bring the claims were so-called “NGO Plaintiffs” (from private advocacy organizations). The ruling said the nongovernmental organizations will supposedly suffer “a loss of political power and funds, among other harms,” simply because a citizenship question is asked on the census.

That is an entirely speculative claim by the judge that does not meet the basic requirements of standing, since they have no right to government funding.

That their supposed loss of federal grants and “political power” contributed to the ruling is part of a larger problem.

For example, the ruling held that among the loser of funds would be Planned Parenthood of New York City. The judge also quoted CASA’s chief of programs and services, George Escobar, as bemoaning the fact that, as a result of the citizenship question, CASA is having to divert “limited resources in an effort to encourage participation in the decennial census.”

Since CASA is concerned to a large degree with protecting illegal aliens, a supposed “diversion” of their resources would actually benefit federal law enforcement and minimize CASA’s obstruction of federal immigration laws. There is little doubt that CASA must be using a lot of these “limited resources” to fight the elected administration.

Justice Department lawyers pointed out that these NGOs had not provided any analysis to show they would incur “any incremental increase in expenditures due to the citizenship question.”

Furman dismissed this argument, writing, “The court is unpersuaded by defendants’ objection to CASA’s lack of detail in accounting for the precise incremental increase in expenditures which, by definition, have not happened yet.”

Left unsaid, of course, is the fact that CASA is a very leftist organization that does not shy away from supporting Marxist governments in Latin America. It has received funding from Venezuela’s government-controlled oil company. It is itself run by a man who wrote for a Sandinista newspaper in Managua in the late 1980s while Nicaragua was run by that Marxist-Leninist Party.

Are these the groups that we want having access to public funds?

The court admitted that there is “no dispute that the Constitution, the Census Act, and the [Administrative Procedure Act] allow the secretary of commerce broad discretion over the design and administration of the decennial census.” But then, the judge strains to ignore that broad discretion to conclude that Ross violated the Administrative Procedure Act in adding the citizenship question.

Most blatantly, in the eyes of the judge, Ross “ignored, and violated, a statute that requires him, in circumstances like those here, to collect data through the acquisition and use of ‘administrative records’ instead of through ‘direct inquiries’ on a survey such as the census.” This despite the fact that there are no “administrative records” that accurately tally all of the noncitizens in the country, particularly those who are here illegally.

Additionally, Ross’ decision was “arbitrary and capricious”—a no-no under the Administrative Procedure Act—because he “failed to consider several important aspects of the problem; alternately ignored, cherry-picked, or badly misconstrued the evidence in the record before him; acted irrationally both in light of that evidence and his own stated decisional criteria; and failed to justify significant departures from past policies and practices—a veritable smorgasbord of classic, clear-cut APA violations.”

Actually, the judge seems to be more accurately describing his own behavior in this opinion.

It is here that the judge considered the evidence selectively, resulting in a decision that weakens the executive in favor of the administrative state and its NGO allies, both of which are constitutionally dubious.

The judge wrote that under the Administrative Procedure Act, before enacting any reforms, the executive branch must “consider all important aspects of a problem; study the relevant evidence and arrive at a decision rationally supported by that evidence; comply with all applicable procedures.”

Unfortunately, the Census Bureau has long been unduly influenced by a coterie of liberal outside groups inside its own National Advisory Committee on Race and Ethnicity, and other groups also known as the “stakeholders.” The judge’s demand is, therefore, a recipe for handing power to the administrative state—a problem he himself recognized in an offhand way by observing “some may deride requirements as ‘red tape.’”

As the judge himself recognized, there was “near uniform opposition to the addition of the citizenship question from stakeholders,” almost all of whom are also radical left-wing organizations with their own objectives that have nothing to do with the best interests of the public and the nation as a whole.

The judge’s claim that asking the citizenship question was not a rational decision is not supported by the evidence. This is particularly true of his cavalier dismissal of the Justice Department’s argument that such citizenship/noncitizenship data is necessary for effective enforcement of the Voting Rights Act.

One of us, Hans von Spakovsky, worked at the Justice Department coordinating enforcement of the Voting Rights Act, and affirms that having accurate citizen population data is essential to fashioning remedies for violations of the law.

A Threat to Our Constitutional Order

Aside from questions of constitutionality—weighty enough in themselves—this issue goes to the heart of what the United States is. The founding documents give us strong hints.

The Constitution itself starts with “We The People of the United States,” suggesting from the start that we constitute one people, and uses the word “citizen” 27 times—as in when it safeguards “the privileges or immunities of citizens of the United States.”

The Declaration of Independence meanwhile states that governments “are instituted among Men” to secure the rights of the people who instituted it.

The only distinction that is valid in the eyes of government, then, is that between citizen and non-citizen. The first are the people who elect the government and whose rights government safeguards, and the second are the members of another polity.

The 2020 census will ask questions on race, ethnicity, sex, sexual orientation, and age. Yet according to this Manhattan judge, it cannot ask the one question that should matter to a self-ruling republic that should be blind to color and sex.

The administration must wage a fierce fight to get this decision overturned. It may think it has its hands full with the government shutdown, but if it doesn’t fight here, there will be no end to the problems it will face.