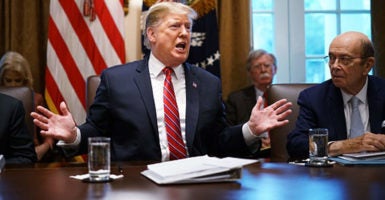 President Donald Trump speaks during a Cabinet meeting on Feb. 12 in the Cabinet Room of the White House, sitting next to Commerce Secretary Wilbur Ross, who oversees the 2020 census. The Supreme Court will hear arguments about whether the census can include a question about citizenship. (Photo: Mandel Ngan/AFP/Getty Images)

The Supreme Court will settle the question on whether the question of citizenship can be included in the 2020 census, bypassing an appeals court hearing.

The high court announced Friday it will hear arguments in April, with a likely decision by June. Commerce Secretary Wilbur Ross announced last year the Census Bureau would add the question.

Last month, U.S. District Judge Jesse M. Furman of the Southern District of New York ruled the Census Bureau could not ask about citizenship. The judge ruled the question would lead to undercounting illegal residents and Hispanics.

The next week, the Trump administration moved to bypass the appeals courts, and take the issue straight to the Supreme Court, given the urgency to prepare the census. The case would normally be appealed to the U.S. Court of Appeals for the 2nd Circuit.

Citizenship would seemingly be more important than knowing the race or gender of someone filling out a census form, said Michael Gonzalez, a senior fellow for national security at The Heritage Foundation, since the government’s job is to protect the rights of its citizens.

“The only distinction that government should make is who is part of the polity and who isn’t, whose natural rights is the government set up to safeguard,” Gonzalez told The Daily Signal. “These rights don’t depend on your color, ethnicity, sex, etc. … Yet liberals insist that the census must ask these questions and not who is a citizen and who isn’t.”

The high court’s ruling will likely also decide the fate of at least four other lawsuits filed over the question, including a trial in San Francisco, the Associated Press reported.

This would mark the first time since 1950 the citizenship question was on the census.

Opponents of the policy, which includes immigration groups and Democratic-led states and cities, contend the question would discourage minorities from sending in their census forms.

Census numbers determine apportionment for how many members of the House of Representatives a state has. Thus, if more noncitizens are counted—legal or illegal—it could increase the representation for a particular state.