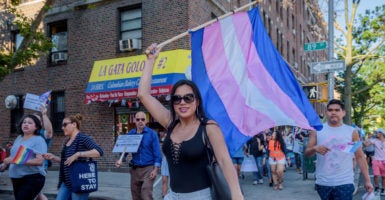 Conservative columnist Daniella Greenbaum announced her resignation from Business Insider on Thursday after the news website deleted her opinion piece arguing that actress Scarlett Johansson should not be chastised for playing a transgender role.

“I wish I could say I am surprised,” Greenbaum wrote in her resignation letter. “Unfortunately, what happened with my piece—the tarring of a commonsensical view as somehow bigoted or not thought out; the capitulation on the part of those who are supposed to be adults to the mob—is a pattern happening all over the country.”

Greenbaum’s column about Johansson’s role in upcoming film “Rub & Tug” was published on Friday. It was later deleted when other Business Insider employees claimed they found it offensive.

“Scarlett Johansson is the latest target of the social-justice warrior mob,” Greenbaum wrote in the column. “The actress is being chastised for, well, acting.”

I believe female actors can play men and trans men. That is the apparently controversial view that inspired BI to take down my piece. I have resigned from @businessinsider and explain why in my letter to EIC @nichcarlson pic.twitter.com/5G2UZggXi9

The column was originally scrubbed from the site. Business Insider partially republished it on Tuesday as a heading with no text, except for a note stating that Business Insider deleted the column because it did not meet “editorial standards,” reported CNN.

Business Insider created new guidelines for its opinion pieces on “culturally sensitive topics, such as marginalized communities, race, or LGTBQ+ issues” because of Greenbaum’s column. Its global editor-in-chief sent an internal email on Monday announcing that all “culturally sensitive” stories will be examined by the writer’s editor and a site executive editor or editor-in-chief, reported CNN.

“Ultimately, it is the first editor’s responsibility to flag culturally sensitive stories,” Nicholas Carlson, Business Insider’s global editor-in-chief, wrote in the email. “It may be hard to tell which are and which are not. The policy is to err on the safe side, even if it slows us down.”

Carlson also banned the phrase “social justice warrior,” which Greenbaum used in the first sentence of her column.

“There should be no partisan name-calling,” he wrote in the email.