In the Trenches of the War in Ukraine, I See History Repeating Itself 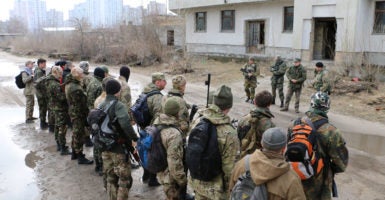 In that day’s fighting, the Ukrainian military said it had killed nine soldiers from their adversary’s ranks—a combined force of pro-Russian separatists, foreign mercenaries, and Russian regulars.

On Wednesday, three Ukrainian soldiers died in an artillery attack on their front-line position near the port city of Mariupol on the Sea of Azov coast. 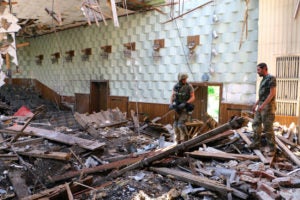 That day, the Ukrainian military reported that it had killed 10 combined Russian-separatist soldiers.

Also on Wednesday, two civilians in the town of Zalizne, on the Ukrainian-controlled side of the front lines, were wounded by artillery fired from combined Russian-separatist positions.

The man and woman—a husband and wife, both in their 50s—were standing in their front yard when shrapnel cut them down.

They lived. But in May, in that same small town in eastern Ukraine, a 15-year-old girl named Daria Kazemirova was killed by Russian artillery as she was visiting her grandmother. 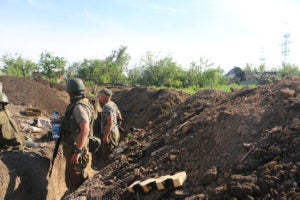 A century after the end of World War I, there is another trench war ongoing in Europe.

After more than four years, Russia’s proxy war in eastern Ukraine is not over, and people are still dying. The war in eastern Ukraine is not a civil war. It never was. It always has been, and remains, a Russian invasion. And a much bigger war—which could threaten NATO’s Baltic countries of Estonia, Latvia, and Lithuania—remains just one “Franz Ferdinand” scenario away.

This year marks the centennial of the end of World War I.

As the artillery thunders every day over the trench lines and no man’s land in eastern Ukraine, one wonders—Could it happen again?

In fact, it already has.

Not to Bore You

Recently, I watched a segment of “Fareed Zakaria GPS” on CNN.

Zakaria spoke about how Eastern Europe is militarizing due to the Russian threat. I was happy to see the coverage, but, I must admit, I was disappointed that the story was presented as if it were a secret, which CNN had just recently uncovered for our enlightenment. 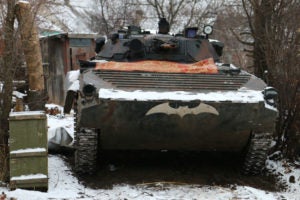 Along a roughly 250-mile-long front line in eastern Ukraine, the war has gone on for more than four years.

I’ve been reporting on the war in Ukraine and the resultant militarization of Eastern Europe for more than four years. In that time, I’ve made numerous trips to visit U.S. and NATO forces in the region, as well as out to the front lines in Ukraine’s embattled eastern Donbas territory.

After all my reporting over the years, I’m still struck by how seriously people in NATO’s Baltic countries perceive the threat of Russian military aggression. The war in Ukraine is not a quarantined conflict, if it ever was. In fact, I was just in Latvia and Poland this summer, where I witnessed several U.S.-led NATO exercises intended to deter Russia from an invasion.

Russia is now embroiled in a conflict with Western democracy writ large. And in that conflict, all roads lead back to the battlefields of eastern Ukraine where the cannons still thunder, and people are still dying.

For many Ukrainian soldiers, after four years of constant combat, war has become a way of life.

We tend to think that history inevitably arcs in the right direction—toward peace. For that reason, we are prone to mistakenly believe that the era of world wars is over.

But it doesn’t feel that way in Ukraine these days—or in the Baltics, for that matter.

For Whom the Bell Tolls

Following is the opening to a piece I wrote in 2014 when I was still a freelancer.

I adapted the segment from an article written by Ernest Hemingway in 1938 while he was covering the Spanish Civil War. 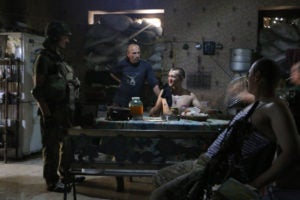 Ukrainian soldiers hole up in a ruined home in eastern Ukraine. Outside, the sounds of artillery and gunfire seemingly never stop.

In the fall of 2014, when I wrote the words below, I was fresh off the battlefields in eastern Ukraine. In that first summer of the war, I’d seen tank battles and artillery barrages. And many dead soldiers, too.

Then, as now, I can’t help but worry and wonder, is the war in Ukraine the Spanish Civil War of our time?

In 2014, I wrote for Blue Force Tracker, a now-shuttered military news site that I had founded and used to run:

It has been like this in Ukraine for more than six months. And it bores you. The words, ‘war in Ukraine,’ mean nothing to you anymore. It’s a back page story that doesn’t scare you. It’s normal, expected, and just a drowned-out voice in the chorus of world news. Voices like me, who claim the war in Ukraine could turn into a world one, no longer frighten you. Nobody believes it could actually happen.

But there is going to be a war in Europe. In fact, Ukrainian and Russian soldiers are already dying in it. So what are we, the democratic nations of the world, going to do about it?

During the winter of 2014, as the war in Ukraine simmered under the first Minsk cease-fire, I had run up against that old nemesis of any freelance war correspondent—financial reality.

I needed a steady income, and I couldn’t work for peanuts. Reluctantly, I returned to the U.S. that winter in search of a full-time, paying journalism gig that could finance my way back to Ukraine.

Ukraine had become the ever-present center of gravity to each and every thought. Desperately, I searched for a way back.

After some weeks in my hometown of Sarasota, Florida, (living with my parents, hardly a self-esteem booster for a then-31-year-old former Air Force pilot), I decided to travel to Washington, D.C. I had nothing waiting for me there, only the faint hope of finding a job that could finance my way back to Ukraine. 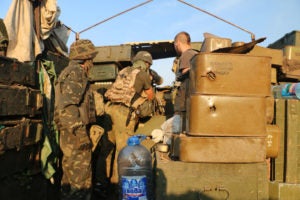 A front-line trench in eastern Ukraine. Combined Russian-separatists positions are about 500 meters away across no man’s land.

So, I loaded whatever was left of my whittled-down personal effects into my Jeep and put the rest in a storage unit. Then I said my goodbyes and without any fanfare or much ado slipped out of town. I drove north to Washington along the East Coast.

I stopped for a night at Sea Island, Georgia, and splurged for a room at the Cloister, a beautiful resort hotel dating back to the 1920s. In the evening I had drinks at the ornate, wood-decked bar. It was filled with people on holiday. Groups of men on golf trips smoked cigars in high-backed leather chairs and talked loudly about the news of the day.

I was alone at the bar. I ordered Old Fashioneds. The alcohol was calming, but all I could think about was Ukraine. It seemed like I was watching the moment I was living in through a TV screen, unconnected physically to where I was because my mind was 5,000 miles away in Ukraine—where I really was.

In the bar, each face, every sound, even the smells conjured reminders of Ukraine and the war. Every atom of me yearned to get back there, somehow. 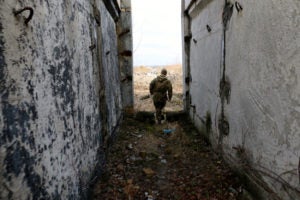 The war in Ukraine has killed more than 10,300 Ukrainians, and displaced more than 1.7 million people from their homes.

The barman snapped me out of my introspective tailspin and we got to talking. He asked me my story, and I explained. He shook his head in disbelief as I described the battle for Mariupol.

I described the burnt bodies in the destroyed armored personnel carriers and tanks. I recounted how the rumble and flashes of the artillery at night were just like a Florida thunderstorm.

I explained the dilemmas faced by young families, like my friends Leonid and Nataly Oksanichenko. A full-blown Russian sack of Mariupol seemed imminent that summer.  So, with their then-3-year-old daughter, Veronika, the young couple had to decide whether to take their chances in the war zone or become refugees.

I remember what Nataly wrote to me when the outcome of the battle for Mariupol was still very much in doubt, and the thunder of artillery from the city’s edge was loud enough to rattle windows in the city center.

“This isn’t how I want my daughter to grow up,” Nataly said.

The barman wiped clean a beer glass and shook his head as I recalled this story.

“You never see anything about all that in the news,” he said. “It’s a shame, really, that no one back here knows. What you do takes a lot of guts, man. It’s damn heroic, if you ask me.”

He gave me another drink on the house. I said thanks and enjoyed the Old Fashioned, but I felt awkward at the compliment. Whenever someone thanked me for my service while in the military, I always felt a little silly about it, too. But truly, such accolades were precious. It was like that for most people in the military, I suspect. It doesn’t matter if it was lip service praise, or truly sincere. It meant we weren’t forgotten. That was enough. 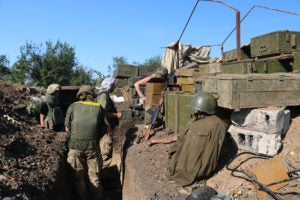 To shelter from enemy artillery and small arms fire, Ukrainian soldiers have built a network of trenches in eastern Ukraine.

As a war correspondent, however, words like brave, hero, or courage—well, they all seemed misplaced. Such words belonged to someone else. Yes, there is a degree of guts required to walk head-on into a war zone. Moving toward the sounds of gunfire and artillery is about as scary as scary can be. But that’s not heroism. Heroism, at least to me, implies a degree of selflessness. Heroes, after all, don’t search for reasons to be heroic.

And a hero should be a symbol of virtue for others, an inspiration to live according to the more impressive qualities that lie dormant in all of us. My reasons for going to war as a journalist were far too selfish for me to be called a hero. A hero’s courage is inspired by a desire to save others, not career advancement.

I did, however, gratefully accept the free drink. Also, I was heartened by the barman’s disquietude about his ignorance of the war. I understood full well that the war in Ukraine is far away, and it hardly impacts most Americans’ day-to-day lives.

But that man wanted to know more about the war. And that is, I think, a very good thing.

Many dark forces in the world are held at bay by a thinner margin than those of us who have only known peace in our lives understand. Therefore, as journalists, we have to make the unimaginable, imaginable. After all, the greatest asset to a democracy isn’t its politicians, or its journalists, or even its military—it’s an educated population, which sees the world as it truly is.

I’ve written this before, but it bears repeating:

The only way to prevent the next world war from happening is to believe that it could.