These New Tariffs Could Upend the Newspaper Industry 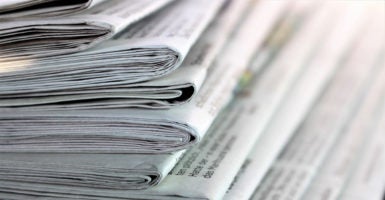 A Washington state newsprint producer is single-handedly upending the U.S. newspaper industry, and not in a good way.

The North Pacific Paper Co. pressured the Trump administration into levying a tariff on Canadian newsprint imports, claiming the Canadian producers possessed an unfair advantage that allows them to charge less than market price.

President Donald Trump agreed and has allowed the Commerce Department to place up to 32 percent tariffs on Canadian newsprint imports.

Only North Pacific Paper, which employs fewer than 300, considers the tariff a victory.

The American Forest and Paper Association actually opposed the measure. It’s the firms in the 600,000-person newspaper industry, however, for whom the new trade restrictions could be the fatal blow.

Tariffs on Canadian imports drive up newsprint costs by roughly 20 percent to 30 percent. According to the Daily News in Longview, Washington, the price of a ton of 30-pound newsprint rose from $560 in August 2017 to $662 in April of this year.

Although large newspapers such as The New York Times are likely to be able to absorb the increase and continue operation, small-market newspapers will not. Forced to either cut costs or shut down, many newspapers will likely downsize, cut employees and advertisements, and begin migrating more content to digital platforms.

The Idaho Press-Tribune predicts that any further increase in newsprint costs will force the paper to consider a reduction in publishing days to avoid a shutdown.

The Tampa Bay Times estimates a $3 million cost increase and that it must cut 50 jobs to make up for it.

Higher prices are not the only danger newspapers face. Shortages in the newsprint supply threaten to stunt news output.

North Pacific Paper is one of just five newsprint mills still operating in the U.S., and the operating mills cannot meet the U.S. demand for newsprint.

The Tampa Bay Times cites John Snyder, the CEO of PAGE, which is a cooperative of small- to mid-sized U.S. newspapers, warning, “We have members who are literally running out of paper, and nobody to go to for help, because most of the mills are sold out. So, it’s not just a pricing issue, but people can’t even get paper.”

The lack of paper availability and higher prices will incentivize newspapers to focus on digital media. Although adopting digital platforms is nothing new for larger publishers, many small newspapers, especially in rural areas with poor internet connections, are not as easily able to adapt.

Although the newsprint tariffs are not directly connected to Trump’s larger NAFTA-related negotiations, their effects on the newspaper industry serve as an important reminder of the unintended—and often negative—consequences of protectionism.

When the government intervenes in the economy on behalf of one firm or a few, the higher prices and shortages that result can threaten entire industries in related sectors, not to mention the pocketbooks of American consumers.

For the good of all, the best trade is free trade. When the government lets the American people make the best deals for themselves, we all benefit from an economy running at peak efficiency.

The freedom to trade is the very foundation of U.S. prosperity. When government restricts that freedom, we all pay the price.