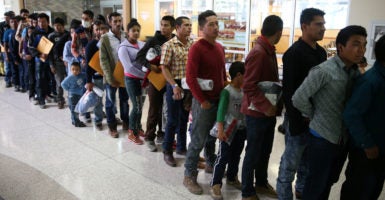 Illegal immigrants just released from detention through "catch and release" immigration policy stand at a bus station before being taken to the Catholic Charities relief center in McAllen, Texas, on April 11. (Photo: Loren Elliott/Reuters/Newscom)

Conservative Republican members of Congress are sharply criticizing their Democratic colleagues on immigration, accusing them of wanting to go back to so-called “catch and release” policies for illegal immigrants.

“Only 19 percent of the American people support the Democrat position,” said Rep. Raul Labrador, R-Idaho, citing a new Economist/YouGov poll. “Catch and release” is the controversial practice where illegal immigrants are released from custody and told to show up to a court hearing at a designated later date. But Republicans contend that the vast majority do not appear for their hearings, which usually occur three to five years later.

Labrador referenced the Economist/YouGov poll, conducted June 17-19 of 1,500 U.S. adults, at the monthly Conversations with Conservatives event on Capitol Hill.

The poll also found that a majority of Americans supported keeping illegal immigrant families together, with 44 percent saying that those families should be detained together until a court hearing determined whether they would be allowed to stay in the United States, a practice that was put in place Wednesday by President Donald Trump via executive order.

The poll also found that only 12 percent of Americans supported detaining parents and keeping their children in separate shelters, while 8 percent supported holding children in juvenile detention centers.

“The vast majority of the American people understand that we have to have a zero-tolerance policy for people coming into the United States,” Labrador said, “but … what they want is to keep the families together while they’re being detained.”

Reps. Ralph Norman, R-S.C., and Jim Jordan, R-Ohio, also criticized Democrats, accusing them of not wanting to actually solve the issue of illegal immigration in an election year. They said that Democrats had given lip service to border security measures, but had shifted to an open borders position.

Meanwhile, despite this week’s media coverage of immigration, President Donald Trump has maintained his job approval rating. A Morning Consult poll reports that “44 percent of registered voters approve of Trump, while 51 percent disapprove of him—little changed from a poll conducted before the uproar over the policy went into full swing.”