Illegal Immigrant With a Violent History Charged With Killing 5. Now a GOP Senator Is Asking Questions. 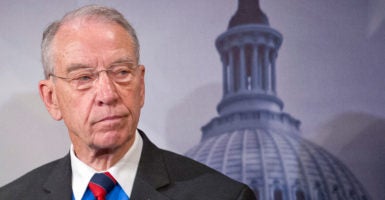 Sen. Chuck Grassley, R-Iowa, wrote a letter to the Obama administration asking how an illegal immigrant charged with murder in a June arson fire was able to remain in the country. (Photo: Ron Sachs/CNP/AdMedia /Newscom)

The Republican leader of the Senate Judiciary Committee is seeking further answers from the Obama administration about why an illegal immigrant charged with murdering five homeless people in a Los Angeles arson fire this summer was not previously deported.

Sen. Chuck Grassley of Iowa on Wednesday wrote a letter to Sarah Saldana, the director of Immigration and Customs Enforcement, asking follow-up questions related to the government’s response to a previous inquiry by the senator into how Johnny Josue Sanchez of Honduras, the suspect, was able to stay in the country despite having a violent history.

“Specifically, [Grassley] is asking whether Sanchez was not considered a priority under the Obama administration’s Priority Enforcement Program and whether federal authorities were blocked by local sanctuary policies that prevent cooperation with federal immigration officials,” the letter states.

Sanchez was arrested by the Los Angeles County Sheriff’s Office on June 13 for five counts of murder and two counts of attempted murder after he allegedly set fire to a vacant building where five homeless people were squatting, including four individuals from Iowa.

Shortly after the incident, on June 27, Grassley and Rep. Bob Goodlatte, R-Va., the chairman of the House Judiciary Committee, wrote a letter to Jeh Johnson, the Department of Homeland Security secretary, to learn more about Sanchez, who, according to media reports, had been arrested three times in the months before the fire.

The Los Angeles Times reported that Sanchez was arrested by border patrol agents in 2012 for illegally entering the country at the southeastern California border. Sanchez was promptly released from custody, the newspaper reported, because he had no previous immigration violations or criminal history.

Sanchez was then placed under supervision and ordered to report regularly to immigration authorities, but he stopped reporting in August 2014.

According to the Times, the Los Angeles Police Department does not honor immigration requests from the federal government to be notified of a person’s release from jail unless a warrant is issued or a judge has vetted the request.

In response to Grassley and Goodlatte’s original inquiry, the senator says, the Obama administration acknowledged more details about Sanchez’s history.

Grassley says he learned that Sanchez lied about his birth date to the border patrol upon entering the country illegally, which allowed him to be processed as a juvenile and sent to a youth shelter in California.

Sanchez stayed at a juvenile facility in Fullerton, California, for seven days, Grassley says, until the Honduran Consulate in Houston, Texas, verified Sanchez’s true birth date and provided a birth certificate showing he was not a juvenile.

After receiving this information, Immigration and Customs Enforcement regained custody of Sanchez and then released him after he signed a document promising to report to future court appearances related to his immigration status.

He never made it to court.

“Considering that Sanchez had intentionally misled federal authorities, it would seem inevitable that Sanchez would fail to appear before ICE [Immigration and Customs Enforcement] as directed,” Grassley wrote in Wednesday’s letter. “Sanchez should have been detained until his removal was completed.”

But more concerning to Grassley, he says, was that Immigration and Customs Enforcement, after Sanchez’s subsequent arrests this year, never requested that the Los Angeles Police Department issue a detainer on him to hold him in custody, or notify federal immigration authorities of his pending release from jail.

Grassley wants to know why those requests were never made to the local police department, and whether this decision was related to the Obama administration’s decision in 2014 to narrow the types of people it seeks to deport.

Immigration and Customs Enforcement officers are told to first target illegal immigrants considered to be threats to national security and public safety, who have likely been convicted of a felony. Other priorities for deportation include individuals who have been convicted of multiple misdemeanors, and recent arrivals who came here illegally after Jan. 1, 2014.

Grassley also asks in the letter whether Immigration and Customs Enforcement even knew about Sanchez’s previous arrests this year, or if its knowledge was limited because of Los Angeles’ policy to limit cooperation with federal immigration requests.

“Was Sanchez not considered a priority under the administration’s Priority Enforcement Program (PEP)? Was ICE never informed of the previous arrests because of Los Angeles’ sanctuary policies?” Grassley asked.