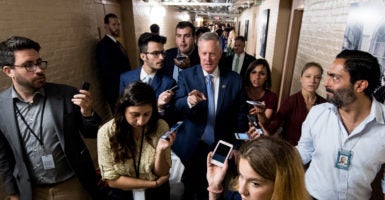 “I know a number of us have a more narrow-scoped bill that would deal with the separation issue but also deal with some of the asylum and catch-and-release issues,” Rep. Mark Meadows, R-N.C., says. (Photo: Bill Clark/CQ Roll Call/Newscom)

The chairman of the conservative House Freedom Caucus says he will continue to push for a solution to address concerns of separating illegal immigrant parents and children, even as one immigration bill failed to pass Thursday and a vote on a more moderate proposal is scheduled for next week.

“If both of these bills fail, I think it’s incumbent upon us to circle back,” Rep. Mark Meadows, R-N.C., said at a gathering of conservative lawmakers and media held before Thursday’s vote.

“I know a number of us have a more narrow-scoped bill that would deal with the separation issue but also deal with some of the asylum and catch-and-release issues at the border as well as funding for additional adjudicators and housing, keep family units together,” said Meadows, who is chairman of the House Freedom Caucus, at the monthly Conversations with Conservatives event on Capitol Hill.

Under the catch-and-release system, illegal immigrants are apprehended but then released under the condition that they appear for a scheduled hearing. However, they often fail to do so.

Following the press event, the stronger, more conservative immigration bill sponsored by Rep. Bob Goodlatte, R-Va., failed 193 to 231 in the House. The vote for “compromise” legislation pushed by House Speaker Paul Ryan was scheduled for Friday but moved to next week. Both bills include amnesty for illegal immigrants.

So, here’s where we are.

— 4:30, the House Republicans will go into a meeting to discuss the contents of the "compromise” immigration bill.

— It’s likely that this bill comes up later, or tomorrow. Who knows. Leadership says tomorrow, but they started the day saying today

Meadows’ bill, the Equal Protection of Unaccompanied Minors Act, ends loopholes in the United States immigration system by reforming the Department of Homeland Security asylum system and helps keep families together who might have been separated at the border.

“We have drafted legislation that we have introduced, we have modified that legislation to incorporate some of the concerns that some of the more moderate members had and Democrats had and so I think it is incumbent upon us to come back,” Meadows said.

Meadows voted for the Goodlatte bill, but said the legislation was not as strong as it could have been.

The bill originally crafted by Goodlatte, chairman of the Judiciary Committee, would require employers to use E-Verify, now a voluntary system, to check the immigration status of employees. It also would give renewable legal status to the 700,000 Deferred Action for Childhood Arrivals program recipients for three years, authorize a wall at the U.S.-Mexico border, increase border security in other ways, and end both the visa lottery program and the practice known as chain migration.

The “compromise bill,” expected to be voted on Friday, advanced by Ryan, R-Wis., would give DACA beneficiaries a path to citizenship while including $25 billion for Trump’s promised border wall.

Both the Ryan and Goodlatte bills, as well as the bills introduced Monday by Sen. Ted Cruz, R-Texas, and Meadows also would allow parents who crossed the border illegally to stay with their children at detention centers.

“All of us agree that it is important and even critical to keep kids with parents,” Cruz said in a statement. “This is an area where there should be common ground. We should be able to work together. Nobody wants to see children separated from their moms and dads. All of us should also agree that we don’t want a system that incentivizes more and more children to be brought here illegally, to be subject to violence and assault from human traffickers.”

Lawmakers at Conversations with Conservatives said the Goodlatte bill might have had a better chance of passing had it gone through regular order.

“We didn’t even get to vote on Chairman Goodlatte and Congressman Labrador’s legislation in the committee, let alone the floor,” Rep. Jim Jordan, R-Ohio, a former chairman of the House Freedom Caucus, said, adding:

“If you allow the will of the body to work, you will go through the committee process, the committee will spit out a bill, that bill will go to the floor, and it could go up or it could go down,” Labrador said. “Then we learn, are there 10 members who are against it or are there really 60 members who are against it, but we always have to reply on leadership telling us how many members are for or against a bill.”

Labrador said that when Ryan retires, the next speaker of the House must be committed to passing bills through regular order.