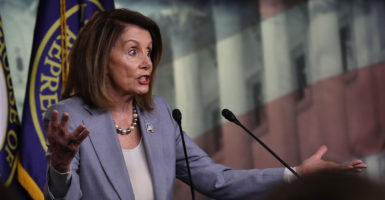 “This is not about tolerance,” Pelosi said in a video posted to Twitter. “This is about respect for our LGBTQ communities, this is about taking pride.”

“We won the fight in the House today, and we will continue until we see these protections become law,” House Judiciary Chairman Jerry Nadler, D-N.Y., tweeted moments after the bill passed.

The bill, which is not expected to pass the Senate due to its Republican majority, adds sexual orientation and gender identity to characteristics—race, color, religion, sex, or national origin—protected from discrimination under the 1964 Civil Rights Act.

By inserting sexual orientation and gender identity into current anti-discrimination law, the bill would make hospitals and doctors vulnerable to litigation “if they don’t follow the medical recommendations of the transgender movement,” Emilie Kao, director of The Heritage Foundation’s DeVos Center for Religion and Civil Society, wrote in a January commentary.

If passed, the Equality Act would hurt women by “dismantling sex-specific facilities, sports, and other female-only spaces,” The Heritage Foundation’s explainer stated, as well as compromise the work of charities, if they were unwilling to open up sex-specific areas, such as bathrooms and housing, to anyone based on gender identity, not sex.

The explainer also said that parents’ rights could be affected by the Equality Act.

By silencing the scientific debate on transgender-affirming therapies through the politicization of medicine, the Equality Act would further normalize this radical protocol, and create an expectation that parents comply.

In fact, parents in Ohio lost custody of their seventeen-year-old daughter because they declined to put her on testosterone supplements.

Under President Donald Trump, the White House routinely issues a statement of administration policy for various bills—stating whether it would suggest the president sign or veto legislation and why, as The Daily Signal’s Fred Lucas recently reported.

While an administration official said “this bill in its current form is filled with poison pills that threaten to undermine parental and conscience rights,” the administration has yet to issue a statement of administration policy on the bill, as it did for the Born-Alive Abortion Survivors Protection Act and Climate Action Now Act, among others.

“Today is a truly historic day for civil rights in our country,” Rep. Mark Pocan, D-Wis., tweeted. “With final passage of the [Equality Act] in the House, we have taken the first step to explicitly bar discrimination on both sexual orientation and gender identity for every American.”

But House Republicans hardly see it as such.

“HR 5 is an enormous blow to religious liberty and our Constitution,” Rep. Jody Hice, R-Ga., tweeted after Democrats passed the legislation. “The [Equality Act] is anything but equal, and enshrines a federally-mandated belief system that if you don’t agree with it – you’ll be punished. Deeply disappointed in the passage of such a destructive bill.”

Rep. Debbie Lesko, R-Ariz., spoke out against the legislation earlier in the week, telling The Daily Signal, “The Equality Act—or I call it the Forfeiting Women’s Rights Act—takes away women’s and girls’ rights that we fought for for years.”

In a statement emailed to The Daily Signal, Kao said the legislation does not represent what the American people want.

“Today, the House of Representatives failed to listen to lesbians and conservatives, feminists and pro-life advocates, and doctors and parents who united against the radical imposition of ideology through the Equality Act,” she said. adding:

True equality exists when the government respects the freedom of all Americans, including parents who want to educate their children according to their own beliefs, doctors who want to use their best medical judgment and women and girls to shower and dress in safety and play sports in their own leagues. But this Equality Act imposes sexual ideology on the nation that endangers religious freedom, freedom of speech, and parental rights by punishing those who dissent from political correctness.