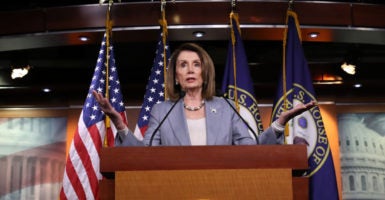 House Speaker is advocating the Equality Act, legislation that would make discrimination on the basis of sexual orientation or gender identity illegal. (Photo: Win McNamee/Getty Images)

Conservative organizations are holding firm against House Democrats’ legislation they say would undermine religious liberty, and some conservatives want the White House to take a stronger stance.

Names on the statement from the Conservative Action Project include leaders of the Family Research Council, the March for Life, Heritage Action for America, the Media Research Center, Judicial Watch, and American Values.

Under President Donald Trump, the White House routinely issues a statement of administration policy for various bills—stating whether it would suggest the president sign or veto legislation and why.

In 2019, the White House issued 21 such statements, including support for the Born-Alive Infant Survivors Protection Act, which would impose penalties for killing a newborn baby after a botched abortion; opposition to the sweeping For the People Act to regulate campaign finance; and opposition to the Climate Action Now Act, which would force the U.S. to return to the Paris climate accord.

The White House did not respond as of publication Friday to The Daily Signal’s inquiry on whether it would issue a statement in opposition to the Equality Act, which House Speaker Nancy Pelosi, D-Calif., has made a priority.

“A statement of administration policy is important in this case because this is such an unacceptable piece of legislation,” Travis Weber, vice president of policy for the Family Research Council, told The Daily Signal. “It’s an attack on women. It’s an attack on religious freedom. It’s important that the White House let Congress know this is unacceptable.”

“Silence on this would undercut the president’s other good work he has done supported by the American evangelical community,” Weber said.

“Everything I have heard suggests there will be” a White House statement, Bovard told The Daily Signal. “It’s significant that the White House clearly state it supports equal rights across the board, but this bill undermines rights of women and completely undermines the rights of people of faith.”

“This exacerbates already troubling trends which are silencing people of faith and limiting the autonomy of religious organizations,” argues the Conservative Action Project’s statement, which  has 97 signators. “The ability of churches, synagogues, and mosques to employ people according to their religious beliefs will be severely limited.”

Despite its title, the Equality Act actually undermines the rights of women and girls, forcing them to share private facilities with anyone claiming to ‘identify’ as a woman. It also diminishes the ability of women to, quite literally, compete on an equal playing field. Males who identify as women are already beginning to dominate women’s sports and strip female athletes of the opportunity to fairly compete for medals and scholarships.

A clear message from the White House could signal wavering House Republicans to oppose the legislation, said Greg Baylor, senior counsel for government affairs at the Alliance Defending Freedom, a legal group that focuses on religious liberty.

“Politically, it would be a mistake to be silent just because this isn’t going anywhere in the Senate,” Baylor told The Daily Signal. “The more Republicans vote for it in the House, the more that is likely to grow. Democrats play the long game.”

The Conservative Action Project’s statement notes that the Equality Act would affect schools and medical services:

Counselors will be prohibited from helping gender-dysphoric children become comfortable with their own bodies. Medical professionals will be vulnerable to lawsuits if they decline to perform hormonal or medical procedures on patients who identify as transgender.

In public schools, curriculum could teach children that their sex is not a biological reality, but subjectively self-perceived. Ultimately, parents’ rights to educate their own children and seek the best medical treatment for them would be undermined.

In Ohio, a judge terminated a couple’s custody of their 17-year daughter when they disagreed with the recommendations of a gender clinic and county agency that she take testosterone injections.

The statement also called for Congress to oppose adopting the Fairness for All proposal, which is a compromise supported by Christian organizations such as the Council for Christian Colleges and Universities that would provide protected status on the basis of sexual orientation and gender identity. It is not yet a bill in Congress.

“Though the Fairness for All Act attempts to square this circle by providing exclusions for religious institutions, it is an unsuitable substitute, and at best, would amount to only a temporary delay to full enactment of the Equality Act,” the statement from the Conservative Action Project says.