House Conservatives Gear Up to Hold Line on Immigration 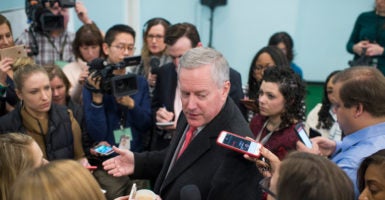 Some conservative lawmakers in the House say they will be uncompromising on legislation to reform the nation’s immigration system, regardless of what more liberal colleagues urge.

“The idea that we are just going to do whatever the Senate says is a little too played out, and it’s really especially wearing thin after we didn’t even make the Senate vote on our budget,” Rep. Warren Davidson, R-Ohio, said Wednesday during Conversations with Conservatives, a monthly meeting with reporters hosted by conservative lawmakers and The Heritage Foundation.

“The feedback I got from our district was pretty strong, like, ‘You guys really let us down on the spending plan, we’re not sure if we are going to hang with you if you let us down on immigration.’ ”

Rep. Mark Meadows, R-N.C., chairman of the House Freedom Caucus, said his colleagues as well as House Speaker Paul Ryan, R-Wis., will face consequences if immigration reform isn’t in line with what President Donald Trump campaigned on in 2016.

That, he said, includes the solution to those brought to America illegally as children and protected from deportation in 2012 under former President Barack Obama’s Deferred Action for Childhood Arrivals program, which Trump ordered phased out by March 5.

We can’t afford to miss the opportunity and do it right because we promised the American people we would do it right. This president was elected largely on an immigration issue that defined him differently than every other candidate, and so it is the defining moment, more so than the budget or anything else that we passed.

“We clearly need to address this issue in March; I’ll just leave it at that,” Ryan said Wednesday.

Trump is asking lawmakers to support an immigration bill, introduced Monday, that mirrors his framework for reforms.

The bill, sponsored by seven senators, including Sen. Chuck Grassley, R-Iowa, chairman of the Judiciary Committee, would allocate $25 billion for border security measures, including radar, physical and virtual fencing, and other technologies. A border wall is among those measures.

“The Grassley bill accomplishes the four pillars of the White House framework: a lasting solution on DACA, ending chain migration, cancelling the visa lottery, and securing the border through building the wall and closing legal loopholes,” Trump said Wednesday in a statement issued by the White House.

“I am asking all senators, in both parties, to support the Grassley bill and to oppose any legislation that fails to fulfill these four pillars—that includes opposing any short-term ‘Band-Aid’ approach,” the president said.

But conservative lawmakers such as Rep. Jim Jordan, R-Ohio, are throwing their support behind a House bill proposed by Judiciary Chairman Bob Goodlatte, R-Va.

Jordan said conservatives like the bill that Goodlatte put together with Reps. Raúl Labrador, R-Idaho; Michael McCaul, R-Texas; and others:

“The Goodlatte-McCaul bill is the bill that we’re moving,” Majority Whip Steve Scalise, R-La., said. “And if you look at where we start today we are finally at least working on a way to come together to address this problem.”

The Goodlatte bill would give legal status to DACA recipients for three years, which would be renewable, and also end the Diversity Visa Lottery.

The latter is a controversial program that issues green cards granting legal permanent residence to 50,000 immigrants each year, as described in a commentary by David Inserra, a policy analyst specializing in homeland security and immigration at The Heritage Foundation.

The legislation also would require employers to use E-Verify, now a voluntary system, to check the immigration status of workers. And it would authorize a wall at the U.S.-Mexico border and other efforts designed to increase border security.

The Grassley plan in the Senate, however, which mirrors Trump’s framework, would grant amnesty to 1.8 million illegal immigrants in exchange for new priorities for legal immigration and more border security, including the president’s promised border wall.

Lawmakers said they will stick to conservative principles in the immigration debate.

“I … really don’t care what the Senate does, we in the House, we are responsible for a good bill, putting it forward and sticking with it,” Norman said, “because a lot of us just aren’t going to settle for anything just because the Senate wants us to. This is a watershed moment, in my opinion … this was the 2016 election.”

The Grassley bill also would restrict family-based immigration to the nuclear family; budget for increased border security personnel; and close what sponsors call loopholes in the immigration process.

The six other Republican senators whose names are on the bill are Tom Cotton of Arkansas, John Cornyn of Texas, Thom Tillis of North Carolina, David Perdue of Georgia, James Lankford of Oklahoma, and Joni Ernst of Iowa.

The Grassley bill “grandfathers all pending family-based visa applications in order to reward those who chose to follow the law and immigrate legally,” according to a press release from Cotton’s office. “The allotment for the Diversity Visa Lottery will be reallocated to reduce this backlog and the employment-based visa backlog.”

Meadows said lawmakers in the House like the Goodlatte bill, and Scalise and other leaders should be able to drive support for it.