Juneteenth Is About the Triumph of American Freedom Over Slavery 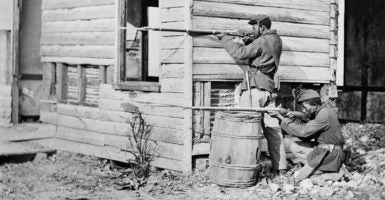 Juneteenth celebrates the liberation of slaves in Texas at the end of the Civil War. (Photo: akg-images/Newscom)

The elimination of slavery in the United States—an institution as old as human civilization but out of step with the nation’s founding principles—did not happen all at once.

During the Civil War, the freeing of slaves came in many stages, starting with President Abraham Lincoln’s famed Emancipation Proclamation of 1863.

But a declaration on paper did not mean that slavery was eliminated in reality. Years of hard fighting to save the nation from dissolution and to ensure the freedom of Southern black slaves lay ahead for the Union Army.

Emancipation came in waves and often simply followed the march of the Union Army.

Texas, for example, was far from the main action in the Civil War, so it took longer for the practical effects of Union victory and the Emancipation Proclamation to take effect there. In fact, it took two full months for emancipation to reach the Lone Star State after Gen. Robert E. Lee’s surrender at Appomattox. Most Confederate holdouts finally capitulated in June, after which the Union occupied the state and put it under military command.

When Union Gen. Gordon Granger steamed into Galveston, Texas, on June 19, 1865, as the newly appointed commander of the District of Texas, one of his first orders of business was to declare all of the state’s slaves free.

It may seem strange to Americans accustomed to having instant news access through the internet, but many of the slaves in Texas had no idea that Lincoln had even issued the Emancipation Proclamation two years earlier.

The immediate response of former slaves wasn’t exactly jubilation, as many lived in fear of retribution from their former masters. Nevertheless, a year later, many of the freed slaves began celebrating “Juneteenth,” a holiday in recognition of their freedom.

At risk of violence, thousands came out to celebrate what to them was freedom at last. And the risks were indeed great—though they were technically protected by the Freedmen’s Bureau, a temporary agency for transitioning black freedmen to a new life of liberty, and the Union Army, such “protection” was no guarantee of safety.

Embraced as an exuberant day of jubilee, Juneteenth combined a history lesson and a political rally with the gospel hymns and sermons of a church service. Barbecue was soon added to the mix—this being Texas—with strawberry-flavored red soda water to wash it down. In time, rodeos, baseball games, and family reunions all became part of Juneteenth traditions.

Juneteenth is thought to be the oldest known celebration of the end of slavery in the United States. It eventually became national, yet it is often overlooked.

In the grand arc of world history, tyranny is common. Liberty is rare. It is a monumental triumph of American civilization that within a century of its creation, the institution of slavery—which had planted its roots so deeply—was eradicated in the United States through the power of our founding ideals and the force of the U.S. military.

For many Americans, the abolition of slavery fulfilled the promise of our nation’s founding: The timeless truths enshrined in the Declaration of Independence would at last apply to everyone, as they were intended.