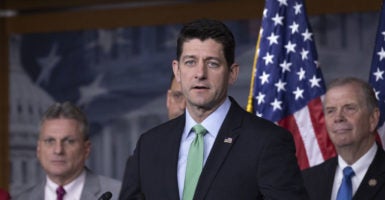 Rather than making the right changes on border security, enforcement, and legal immigration reforms, the bill is based on a complex amnesty scheme. While supporters of the bill may claim that it addresses the broken system, it will actually perpetuate or even worsen the brokenness.

The new compromise bill is a weaker version of the Securing America’s Future Act introduced by Rep. Bob Goodlatte, R-Va., chairman of the House Judiciary Committee. Analysis of this bill found it flawed in several key areas:

While the bill misses the mark in several respects, it does contain some good policies, including:

From this flawed starting point, the new compromise bill mostly gets worse by:

Whenever Congress debates amnesty, it is a time-honored tradition for the bills to keep getting worse. That’s because when amnesty is on the table, everything else is just grease for the wheels. Money for border security, stopping sanctuary cities, closing loopholes, fixing the legal immigration system, etc.—these are all just bargaining chips that can change from one day to the next.

But what doesn’t change is that individuals in the U.S. illegally would receive legal status. This backroom, amnesty-first way of doing immigration reform means that all the other core immigration responsibilities of the federal government are treated as an afterthought and ensures that the broken immigration system will remain broken.

Not only does this way of doing businesses not fix the system, it actually makes it worse by encouraging more illegal immigration.

The U.S. has been here before. In 1986, the U.S. passed an amnesty and then failed to take the necessary steps to stop illegal immigration. The result was millions more illegal immigrants entering the country.

Amnesty sends a message that if you come to the U.S. illegally, eventually you too might be rewarded with citizenship. This perverse incentive only undermines enforcement and border security.

This new compromise immigration bill does just that—it compromises on the core responsibilities of the U.S. government. The American people expect their legislators to advance immigration policies that are good for the nation as a whole.

Rather than starting with amnesty, Congress should go back to the drawing board and tackle these various immigration issues in a step-by-step manner.