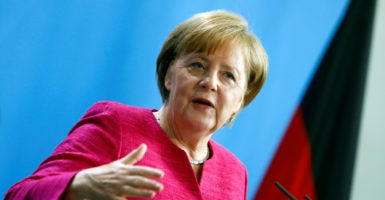 German Chancellor Angela Merkel has come under renewed criticism at home in the wake of crimes committed by migrants. (Photo: Michelle Tantussi/Reuters/Newscom)

Written in broken German, the message said she would be back home in a few weeks and that her mother should not try to find her.

Yet the message was not from Susanna. She had already been raped and strangled, and her body was dumped next to some railroad tracks in the city of Wiesbaden in western Germany.

Almost three years earlier, German Chancellor Angela Merkel had faced a crisis. Millions were fleeing the humanitarian catastrophes in Iraq and Syria and heading to Europe, and the enormous flow of people was placing unsustainable pressure on landing ports in Greece and threatening the territorial integrity of the Balkans.

One of the beneficiaries was Susanna Feldman’s killer.

Ali Bashar, a 20-year-old Iraqi Kurd, entered Germany in October 2015 with his parents and was a blight from the beginning. According to the BBC, he was allegedly tied to a robbery, possession of a weapon, and sexual assault on an 11-year-old girl in the refugee shelter where he lived (and where he dealt drugs).

Bashar’s asylum claim was rejected toward the end of 2016, but he was allowed to stay in the country while he appealed the decision.

Over 18 months later, when he killed Susanna, a decision on his appeal still had not been made. Days after his crime, Bashar and seven other members of his family returned to Iraq. However, he was tracked down by Kurdish authorities and extradited to Germany.

Bashar has since admitted to killing Susanna.

It’s clearly a tragic case, but it’s also not an isolated one.

Hussein Khavari arrived in Europe in January 2013. He proceeded to throw a woman over a cliff that summer in Corfu, Greece, and was subsequently imprisoned for 10 years in February 2014 for attempted murder. However, he was released after just 18 months, part of a government amnesty aimed at reducing strain on its overcrowded prisons.

Khavari journeyed on to Germany, where he arrived in November 2015, and claimed asylum the following February. He claimed to be a 17-year-old Afghan upon arrival, saying that his father had been killed fighting the Taliban.

In October 2016, Khavari raped and strangled Maria Ladenburger, a 19-year-old German student, in Freiburg, in southwest Germany. Khavari left his still-breathing victim to drown in a nearby river after his attack. He was sentenced to life in prison.

During his trial, it emerged that rather than being a 17-year-old fatherless Afghan, Khavari was a Iranian. His father was alive and well, living in Iran. Khavari’s asylum claim was also undecided at the time of Ladenburger’s killing.

Another case from southwest Germany, this time in Kandel, saw Mia Valentin, a 15-year-old girl, being stabbed to death by her ex-boyfriend last December. The killer, Abdul D., came to Germany from Afghanistan in April 2016, claiming to be 14 years old. In reality, he is now 20.

Such stories—coming in the wake of the mass sexual assault of more than 1,000 women in Germany on New Year’s Eve of 2015—have a variety of consequences.

One consequence is political. Concern over immigration could lead to the collapse of Merkel’s coalition government. Horst Seehofer, Germany’s interior minister, wants to begin turning away refugees who have passed through another European Union country before getting to Germany. Merkel is refusing, concerned about the effects this would have on forging a coherent EU-wide refugee policy.

The coalition is splintering, and if an agreement cannot be reached, a vote of confidence in Merkel—and new elections—could be imminent.

Another consequence relates to security. One recent study demonstrated that violent crime had increased by more than 10 percent in 2015 and 2016. Ninety percent of that increase was because of violent crimes committed by male refugees.

Similarly, the sharp increase to the Islamist terrorism threat in Germany is not primarily from radicalized Germans, but from recently arrived asylum seekers. While some plots were thwarted, those in Wurzburg, Ansbach, Berlin, and Hamburg were not.

In that environment, many Germans have turned to a radical, outsider party that made a platform out of cracking down on immigration. Alternative for Germany got about 6 million votes (13 percent) in September 2017 and is now the third-biggest party in Germany.

That’s not because Germany has a hitherto concealed population of racists who were unearthed in the election, but because Merkel very clearly made a cataclysmic mistake.

Germany did take in too many people. It did not know who they were then, and so, it has no idea who is living in the country now. It was too trusting in accepting asylum applicants’ backstories—and the German Medical Association is still speaking out against checking claimants’ ages.

Germany is not deporting enough of those who have no right to be in the country, or making decisions on asylum appeals quickly enough.

If this were solely a German problem, then perhaps it would be easier to contain. Yet it also extends to Sweden, which is dealing with a surge in crime in areas with high concentrations of immigrants.

One recent study in Sweden showed that more than 75 percent (at a minimum) of those claiming to be children were actually adults. Austria, Italy, and other countries in Europe face similar challenges.

A responsible approach would be for nations to listen to voters’ concerns and craft policies that address them.

Merkel’s desire for an EU-led solution demonstrates the hopelessness of the current approach. An unresponsiveness to democratic impulses in the EU is a well-established theme.

Meanwhile, the numbers continue to grow. About 10,000 new asylum seekers come to Germany every month. The government hopes they will integrate, but has no real idea how to make that happen, and the crisis rolls on.