Biden: Obama Will Act With or Without Congress on Immigration 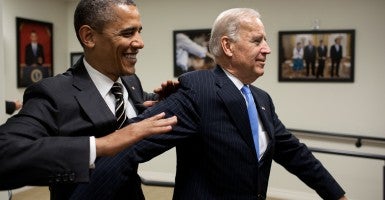 This week brings another “Say it ain’t so, Joe!” moment.

Speaking to Hispanic leaders at a Heritage Hispanic Month event in Washington this week, Vice President Joe Biden told attendees that when it comes to comprehensive immigration reform, President Obama is “absolutely committed to moving forward,” was going to “do an awful lot” and would do so before the end of the year “with or without Congress.”

Biden’s comments, of course, have nothing to do with encouraging bipartisan action on immigration reform on Capitol Hill and have everything to do with firing up Hispanic voters in hopes they’ll turn out for the mid-term elections in November.

But if Obama’s amnesty plan, which he might enact by executive order, is such a good one, why doesn’t he implement it before the election? Could it be that he knows the majority of Americans are opposed to the steps he likely plans to take?

While Biden didn’t give details of the president’s plan in his remarks, there is reason to believe one move Obama may make is to grant legal status to the parents of children who were born on U.S. soil. (Under U.S. law, these children are citizens, since they were born on U.S. soil.) He also may extend legal status to those who have lived in the U.S. for a certain period of years and who, according to the administration, are “law-abiding”–forget the fact they broke the law coming into the country illegally or overstaying their visas.

All told, an estimated 5 million people who are currently in the country illegally would likely be given legal protections and work permits under Obama’s plan.

Right now, Obama is somewhat held in check by the fact that his actions have consequences that could affect him. If he goes too far on immigration before the election, he knows the Democrats will almost certainly lose the Senate and give the GOP control of both chambers of Congress. That might happen anyway, but for now Obama is definitely deterred from acting on such a hot button issue in hopes that the Democrats can hold on.

On numerous occasions, from deciding what immigration laws he wants to enforce to making wholesale changes to Obamacare, the president has shown he is more than willing to go around the Constitution and Congress to get his way.

The American people should be very wary of such a tendency in any president, but especially in one who is entering the last two years of his presidency and who, after November, won’t have to personally deal with the outcome of an election.