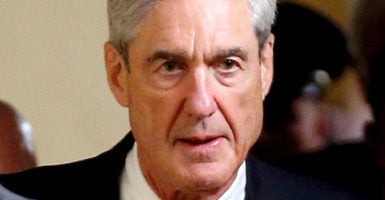 An FBI attorney who worked on the special counsel’s Russia investigation until earlier this year sent anti-Trump text messages to a colleague, including one exclaiming: “Viva le Resistance.”

The attorney’s comments are revealed in a Justice Department inspector general’s report released on Thursday.

The lawyer is not identified, but he worked on the Hillary Clinton email investigation and was the FBI’s lead attorney on the investigation into Russian election interference. He was assigned to special counsel Robert Mueller’s investigation soon after it began in May 2017 and left in late February of this year after some of his private messages were shared with the special counsel.

The inspector general’s report focuses on instant messages that the attorney exchanged with a colleague about the Clinton and Russia probes.

“I am numb,” the attorney wrote on Nov. 9, 2016, the day after President Donald Trump’s election.

“I am so stressed about what I could have done differently,” the lawyer continued, apparently referring to the FBI’s handling of the Clinton email probe.

The attorney’s messages show that he was distressed at the FBI’s decision in Oct. 2016 to re-open the investigation into Clinton’s emails. Democrats have claimed that decision hurt Clinton at the polls.

The FBI lawyer also suggested that he would work to resist the Trump administration.

“Is it making you rethink your commitment to the Trump administration?” one FBI lawyer wrote on Nov. 22, 2016.

During interviews with the Office of the Inspector General, the lawyer claimed that his “personal political feelings or beliefs … in no way impacted” his work on the Clinton or Russia investigations.

The lawyer did acknowledge that the messages created the perception of anti-Trump bias. He told investigators that he “can understand the, the perception issues that come from” the Nov. 22, 2016, exchange.

The Special Counsel’s Office did not immediately respond to a request for comment.