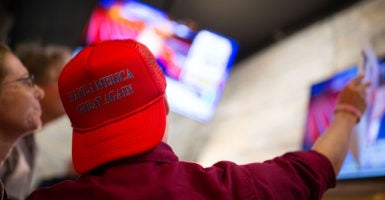 Hill interns say they were refused service by an Uber driver for wearing MAGA hats. Pictured is Joshua Heldwein, not one of the interns, at a watch party at Due Amici restaurant in Tampa, Florida on Nov. 8, 2016. (Photo: Loren Elliott/ZUMA Press/Newscom)

Several interns working on Capitol Hill are accusing an Uber driver of denying them service Tuesday because some happened to be wearing the well known “Make America Great Again” hats.

“I’m a black male in America that supports and voted for Donald Trump,” 20-year-old intern Matthew Handy of Kentucky told Fox News. “We’re supposed to be a country that accepts everybody for who they are, a melting pot, but the moment I say or do something that doesn’t coincide with their political beliefs, I’m the bad guy.”

The interns recall requesting an Uber ride so they could be transported to an event at the Trump International Hotel in Washington, D.C. Once entering the vehicle, the driver became curious about the pro-President Donald Trump caps, and subsequently kicked them out, according to the interns.

Handy, who was in the car, said he was “ticked off” and has reached out to Uber, but hasn’t received a non-automated response.

Like Handy, who is also part of a program designed for up-and-coming black Republicans, 33-year-old intern Adria Barrington of Arizona Republican Rep. David Schweikert’s office is also perturbed by the situation.

The other of three interns reportedly present in the car said he is equally disturbed, arguing that such conduct is un-American.

“To prejudge someone is not in the moral compass of America,” said Elijah Allison, who works for Republican Rep. Ken Buck of Colorado, the official runs the diversity initiative program.

“Even though we may not have the same political affiliations or other beliefs, we should be able to agree to disagree,” he continued.

“I want a statement from the guy, and I want him fired,” he told Fox News.

The alleged incidence would add to a litany of recent events in which some of those who oppose Trump, his supporters, and Republicans in general are being highly confrontational, including in highly public settings. Top officials in the White House like Press Secretary Sarah Huckabee Sanders and aide Stephen Miller, among others, have been kicked out of establishments in recent weeks, not for violating internal policies or law, but because of their work in the administration.

Uber did not respond to The Daily Caller News Foundation’s request for comment in time of publication.