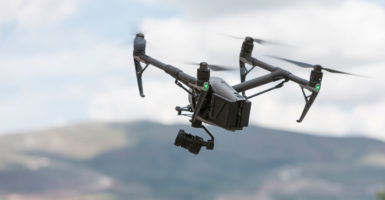 In 2015, a drone crashed into the stands at the U.S. Open tennis tournament in New York City. Local authorities charged the operator with reckless endangerment.

Not long afterward, a similar incident occurred in Kentucky when a drone crashed inside a football stadium with 63,000 fans present. That drone operator received the same charge: reckless endangerment. But that was all.

Drones are a growing phenomenon, and their use—or misuse—can pose a threat to public safety. But law enforcement officials find themselves in a tough spot: While they can enforce local law, federal law makes it illegal for them to disable, damage, or destroy a drone.

The list of drone incidents at sporting events could go on and on. In 2014, an unauthorized drone flew over a University of Texas football game. Another tumbled onto the roof of the Dallas Cowboys’ stadium. Several have flown uncomfortably close to the University of Nebraska-Lincoln’s Memorial Stadium, and another dropped leaflets over both the San Francisco 49ers’ stadium and the Oakland Coliseum.

These flights violate not only state and local law, but also federal regulations. On game days, from one hour before until one hour after games, the Federal Aviation Administration prohibits unauthorized drone traffic from flying within three nautical miles “up to and including 3,000 feet above ground level of any stadium having a seat capacity of 30,000 or more people where either a … Major League Baseball, National Football League, or Division I football game is occurring.”

To its credit, the FAA also informs local law enforcement officers who to contact at the Federal Aviation Administration to discuss violations of federal regulations. The FAA also specifies that officials may enforce local, state, and county criminal laws.

The question becomes, what can be done about unlawful drone conduct while it is happening?

Cathy L. Lanier—former Washington, D.C., police chief who is now the NFL’s senior vice president of security—has said the technology is “out there that we can use, and we do use [it],” but “the technology we really need is not yet legal to use.”

One statute (18 U.S.C. § 32) makes it a federal crime to damage, destroy, or disable an aircraft. Since the FAA has taken the position that drones should be considered “aircraft” for the purposes of all federal law, an officer who needs to disable a drone to protect the public could face significant legal uncertainty.

“Federal law prohibits local law enforcement from disarming or disabling drones, even if they are in restricted airspace,” said Jocelyn Moore, a NFL senior vice president. “This loophole in federal law puts the safety and security of millions of sports fans and event-goers at risk.”

In the 2017 and 2018 National Defense Authorization Acts, Congress granted the department of Defense and Energy certain legal authorities to mitigate the threat of drones.

Now, Congress is considering expanding those authorities to the departments of Justice and Homeland Security through the Prevent Emerging Threats Act of 2018, introduced by Sen. Ron Johnson, R-Wis.

That proposal would authorize federal law enforcement agencies to use counterdrone technologies to “[d]etect, identify, monitor, and track” drones, and if necessary, “disable, damage, or destroy” them in furtherance of certain Justice Department and Homeland Security missions.

The proposal stops short of authorizing state and local counterdrone operations. Instead, it would permit federal authorities to deploy these technologies at sporting and other public events when requested by a state governor or attorney general, “to ensure protection of people and property at mass gatherings, where appropriate and within available resources.”

That might leave the public and many security stakeholders in the lurch.

As Lanier has pointed out, that “doesn’t help us … because I don’t think I’m going to get a Secret Service or [Homeland Security] agent to 256 games a year.”

Leonard Davey, senior director of security for the San Diego Padres, said that “the recent influx of drones has caused concern for us. Our worst nightmare would be to have a drone … fly over the seating bowl or any parking lot area in Petco and have it crash.”

Criminals have also demonstrated they understand the potential of drones. Outside major sports stadiums, people have used drones to transport drugs or air-drop weapons into prisons.

Experience has shown that local law enforcement officers are usually the first responders to illegal drone activity. Crises at major sporting events are no exception.

Those officers deserve clear authority to handle unlawful drone activities, because their jobs may one day demand it.

And in New York, Kentucky, and elsewhere, local justice systems—not just police—have proven to be up to the task. In Seattle, Washington, for example, a local jury found a drone operator guilty of reckless endangerment for crashing a drone that fell and knocked a woman unconscious.

These cases show that local communities can effectively regulate local drone operations, often with laws that are neutral toward technology.

But if local authorities are to prevent more incidents like those in Washington, New York, Texas, and Kentucky from occurring, Congress will need to work toward granting more authority to state and local law enforcement.

Congress might find the current Homeland Security 287(g) program useful as a model. The program authorizes federal immigration officials to deputize local law enforcement officers who, through a memorandum of understanding, execute delegated authority to enforce federal law. That approach would allow state and local agencies to work under federal supervision and prove their ability to use existing technology to stop harmful drones.

Whatever path Congress chooses, it should not leave state and local actors out of the mix for too long.