Seattle Case Shows Why Drone Regulation Should Be Local, Not Federal 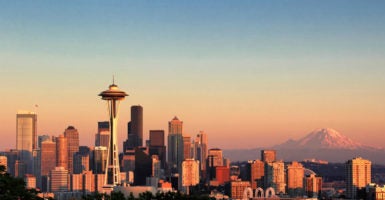 A Seattle municipal court recently convicted a drone operator for reckless endangerment after crashing his drone into a public space, injuring one woman. (Photo: iStock Photos)

Since Christmas 2015, the Federal Aviation Administration has issued new, burdensome regulations on small recreational and commercial drones, ostensibly because these devices carry inherent and unique dangers that only the FAA can safely regulate.

Since June 2015, however, the city of Seattle, Washington, has been quietly proving the FAA wrong. A Seattle municipal court recently convicted a drone operator for reckless endangerment, and sentenced him to 30 days in jail.

This case decisively shows that states and localities are fully equipped to regulate local drone operations through the enforcement of existing, technology-agnostic civil and criminal laws.

During Seattle’s 2015 Pride Parade, Paul Skinner crashed his 2-pound, 18-square-inch drone, which retails at around $1,200, into a building. The drone fell into the crowd below and struck a woman on the head, knocking her unconscious.

Local prosecutors charged the pilot with reckless endangerment. Washington state law (RCW 9A.36.050) makes it a gross misdemeanor to recklessly engage in conduct “that creates a substantial risk of death or serious physical injury to another person.” That is punishable (under RCW 9A.20.021) by up to 364 days in a county jail, or a fine of up to $5,000, or both.

After a four-day trial, a jury of six Seattleites unanimously found the pilot guilty. Seattle Municipal Court Judge Willie Gregory issued the sentence: 30 days in local jail and a fine of $500.

No FAA intervention, no gargantuan new federal regulations, and no drone-specific laws required.

It’s an important lesson to learn. In 2012, Congress made the safe integration of drones—technically, unmanned aircraft systems—into the national airspace a top priority. The FAA responded initially by banning all commercial drone activities unless businesses applied for and received a special federal waiver.

It was only a few short months ago that the first federal commercial regulations went into effect allowing any drone commerce without a waiver. Most drone operations, however, remain banned and still require special approval.

The FAA has also attached severe federal civil and criminal penalties to all manner of drone-related operations on the bizarre theory that a drone is an “aircraft” no different than a 747.

According to the FAA, everything from failing to register with the agency as a drone owner to shining a laser pointer at a drone can land you in jail. Indeed, according to the FAA, under a federal law written to criminalize takedowns of manned aircraft, someone who willfully damages a drone faces a possible 20-year prison sentence.

Skinner should feel lucky that the FAA did not get involved, and that he only got 30 days.

Seattle’s first conviction of a drone pilot with an Icarus complex shows that what drone operators and the public need is not costly and cumbersome federal regulations, but continued enforcement of existing laws at the state and local level.

These laws, including reckless endangerment, trespass, peeping Tom, assault, and a host of other civil and criminal provisions address the underlying harms, rather than the technology used to perpetrate them. In most cases, after all, drones only offer a new way to commit old crimes.

And the local and state officials who enforce them will do just fine without federal intrusion, as the Seattle prosecution proves.

Indeed, Seattle City Attorney Pete Holmes called reckless drone operations “a serious public safety issue that will only get worse.” “Operators should know,” Holmes warned, “that we will continue to go after them when they disregard public safety.”

The FAA can help by changing its approach to drone regulations, concentrating on facilitating rather than inhibiting and criminalizing commercial drone activity.

Congress, meanwhile, should affirmatively establish that low-altitude airspace is generally beyond the reach of the FAA’s drone authority, thus preserving the interests of states, localities, and most importantly, private property owners in the regulation of drone operations that may take place only a few feet above their heads.

Seattle has seen a number of reckless drone flights. But rather than run to bureaucrats 2,761 miles away, they have proven that local authorities are more than capable of handling the occasional wrongdoer.

When it comes to drones, they have shown the nation that we don’t always need to make a federal case out of it.