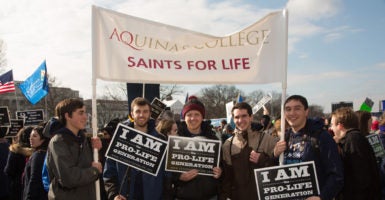 These Aquinas College students likely support the two universities that argued against the Obama administration's mandate to provide abortion services as an unconstitutional violation of their freedom of religion. (Photo: Jeff Malet Photography/Newscom)

Two Christian universities won a lawsuit against the Obama administration’s abortion pill mandate after a judge ruled it violated their religious freedom.

The ruling comes after the two universities filed a lawsuit against the federal government in 2013, alleging the Obama administration mandate was unconstitutional and violated their freedom of religion, according to the report.  The Christian nonprofit Alliance Defending Freedom represented the universities in the suit.

“Given our conviction that life begins at conception and our commitment to the sanctity of life, we find the mandate to provide our faculty, staff and students with insurance that provides access to abortion-inducing prescriptions unacceptable,” Cornerstone President Joseph Stowell wrote in a letter to the university at the time of the lawsuit.

The mandate required all health care providers to ensure access to and the supply of not only abortion services but also birth control, family planning methods, and similar resources. Religion-based hospitals and Christian universities objected to the mandate, but many were not provided an exception and faced punishment if they refused to provide services they found objectionable.

After the Trump administration’s Department of Health and Human Services adopted rules allowing the Obama mandate to lapse, the Justice Department dropped its opposition to the suit. These acts were followed by Bennett’s Tuesday ruling that HHS could no longer enforce the abortion pill mandate at the universities.

Cornerstone and Dordt’s victory comes after a California university as well as an Indiana seminary won similar cases in June, the Free Press reported.

Four Christian universities in Oklahoma also won their cases freeing them from the abortion pill mandate.