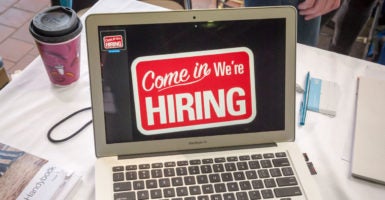 Organized labor is pushing back against new laws against forced unionization in four counties in New Mexico. Pictured: A sign beckons at the TechDay New York event in April. (Photo: Richard B. Levine/Newscom)

Local laws that free private-sector workers from union mandates continue to gain momentum in New Mexico, among other states.

The Chaves County Commission’s five members voted unanimously last month for a right-to-work ordinance that will prohibit private-sector employers from entering into agreements that make union membership and payment of union dues or fees a condition of employment.

On May 21, Chaves, where the county seat is Roswell, became the fourth county in New Mexico to approve a right-to-work law.

The local trend began this year with Sandoval County, which approved a right-to-work law Jan. 19. It continued with Otero County, which did so April 12. Lincoln County followed suit May 15 with its own ordinance banning forced unionization.

With the exception of Sandoval, where the commission approved right to work 3-1 with one abstention, the other county bodies voted unanimously for their ordinances.

Organized labor is pushing back against the county ordinances.

In February, the New Mexico Federation of Labor filed suit against Sandoval’s right-to-work law. The union released a statement detailing its main arguments.

But right-to-work proponents in New Mexico have expressed a willingness to defend the laws in court. In Lincoln, for instance, commissioners openly defied a letter from unions notifying the government of their intention to sue.

As previously reported by The Daily Signal, the legality of local right-to-work laws ultimately could be settled by the U.S. Supreme Court.

>>> Related: How Local Right-to-Work Battles Could Land at Supreme Court

The local right-to-work movement began in Warren County, Kentucky, in December 2014 with passage of an ordinance that became the model for 11 other counties. Kentucky became a right-to-work state in January 2017.

Officials in New Mexico and in Delaware, however, cited the 6th Circuit ruling in arguing for the legality of their own proposals.

J. Everett Moore, county attorney for Sussex County in Delaware, expressed skepticism that local right-to-work ordinances could prevail in Delaware despite the federal appeals court ruling. In large part because of Moore’s opinion, the Sussex County Council in January voted down a right-to-work proposal, 4-1.

Moore argued that the 6th Circuit ruling may not be the final word on the legal merits of local right-to-work laws, since the 7th Circuit is considering a similar case out of Lincolnshire, Illinois.

The 7th Circuit has appellate authority over district courts in Illinois, Indiana, and Wisconsin. If it were to rule against the Lincolnshire right-to-work ordinance, the decision would put it in conflict with the 6th Circuit, meaning the Supreme Court likely would hear the case.

Illinois is now at the epicenter of the right-to-work battle in both the private and public sectors.

Within days, the Supreme Court will issue a ruling in the case of Janus v. American Federation of State, County, and Municipal Employees, Council 31.

Mark Janus, a child support specialist in the Illinois Department of Healthcare and Family Services, joined with others to challenge the constitutionality of state and local laws requiring government workers to pay “fair share” fees to unions as a condition of employment.