How Local Right-to-Work Battles Could Land at Supreme Court 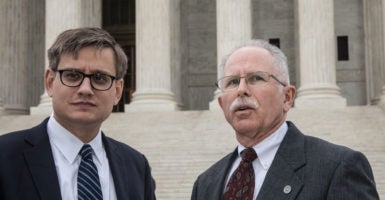 "Those states, like Illinois, that don’t have right-to-work [laws] generally have bad economic policies, and they find it hard to stimulate growth in their communities," says lawyer Jacob Huebert, left, of the Liberty Justice Center. In this photo, Huebert stands outside the Supreme Court with Mark Janus, the lead plaintiff in a case involving unions and free speech. (Photo: Jeff Malet Photography/Newscom)

If a federal court strikes down a local right-to-work ordinance in Illinois, the case could move up to the Supreme Court, according to legal analysts who have argued in favor of similar initiatives in other parts of the country.

“When you have a split between circuits, holding different interpretations regarding the law and precedent, then the Supreme Court is more likely to … hear the case,” Theodore Kittila, a Delaware lawyer who represents the Caesar Rodney Institute, a Wilmington-based free-market think tank, said in an email.

“It’s not automatic, and circuit splits can last for years and years,” Kittila said. “But this is such an important issue, it may be enough to attract the Supreme Court’s interest, even without a circuit split.”

Right-to-work laws prohibit private-sector employers from entering into agreements that make union membership and payment of union dues a condition of employment for their workers.

The Illinois-based Liberty Justice Center, a nonprofit public-interest law firm, is defending the right-to-work ordinance in the village of Lincolnshire, Illinois, against a legal challenge from labor unions.

While no legal injunction has been imposed, Lincolnshire officials decided not to enforce the right-to-work law pending the outcome of the litigation.

Illinois is now at the epicenter of the right-to-work battle in both the private and public sectors.

The Liberty Justice Center joined with the National Right to Work Foundation to represent Mark Janus, a child-support specialist employed by the Illinois Department of Healthcare and Family Services. Janus is the lead plaintiff in a case before the Supreme Court that challenges the constitutionality of state and local laws requiring government workers to pay “fair share” fees to unions as a condition of employment.

Such fees are the payments that nonunion workers are required to pay to cover the costs of collective bargaining agreements between employers and employees. The Janus plaintiffs argue that union priorities are laced with political activism they don’t support and should not be forced to pay for as a condition of employment.

Although the Supreme Court previously turned away a legal challenge to the 6th Circuit ruling in favor of right to work, a lawyer with the Liberty Justice Center said he suspects the high court would step in if the 7th Circuit rules against Lincolnshire.

“If there were a circuit split, then this would be an appropriate issue for the Supreme Court to take up,” Jacob Huebert, director of litigation for the legal group, told The Daily Signal in an interview, adding:

We certainly hope the Supreme Court would take the case up, because it’s an important issue and right to work creates opportunities for communities. Those states, like Illinois, that don’t have right-to-work [laws] generally have bad economic policies, and they find it hard to stimulate growth in their communities.

While the right-to-work ordinance remains on hold in Lincolnshire, both Sandoval County, New Mexico, and the city of Seaford, Delaware, enacted new laws earlier this year that are now in effect.

Kentucky’s local right-to-work laws also remain on the books, but are superseded by the state law that made Kentucky a right-to-work state in 2017.

Local officials in other parts of New Mexico, Delaware, and Pennsylvania are eyeing their own versions of local right-to-work laws, The Daily Signal has learned.

Lincolnshire’s arguments in favor of its local ordinance closely resemble those of Hardin County, Kentucky, which prevailed in a unanimous ruling out of the 6th Circuit, Huebert said.

“We argue that the National Labor Relations Act has never pre-empted the field of right-to-work laws at all,”  Huebert said. “The very first time the Supreme Court considered that question, it said there was no pre-emption. Congress didn’t intend to pre-empt the field, and there’s no basis for concluding that it did.”

“All of the legislative history in the National Labor Relations Act says that Congress intended to stay out of the question of right-to-work laws and leave questions about whether we should have right-to-work [laws] to the states,” he added.

The National Labor Relations Act of 1935, also known as the Wagner Act, specifies that states and territories may enact right-to-work laws.

However, the International Union of Operating Engineers Local 399 AFL-CIO argues in its legal brief in the Lincolnshire case that the 1947 Taft-Hartley amendments to the law prevent localities from adopting right-to-work ordinances.

In a phone interview Friday with The Daily Signal, William A. Widmer III, counsel to the International Union of Operating Engineers Local 399, said that section of federal labor law excludes municipalities and other political subdivisions from enacting their own right-to-work laws.

“During oral arguments, Judge Diane Wood clearly understood that when Congress passed the National Labor Relations Act, it was the intent of Congress to establish a national labor law with the right-to-work option limited to states,” Widmer said. “If the law permitted local governments to pass local right-to-work ordinances, you would have multiple, perhaps thousands of, different laws affecting collective bargaining.”

As for the potential for a split between federal appeals courts on the issue, Widmer said:

I think the 6th Circuit got it wrong, and I think the 7th Circuit will get it right. When you have a split in the circuits, that is typically when the Supreme Court grants a writ of certiorari [and reviews a case]. But there is a strong argument to made that the subsequent action in Kentucky making Kentucky a right-to-work state means that the 6th Circuit ruling is now moot.

The arguments for and against the local right-to-work ordinance in Lincolnshire turn on the authority states give to localities under home rule statutes. That also was the case in Sussex County, Delaware, which voted down a right-to-work bill earlier this year, and in the Kentucky counties that embraced right-to-work laws.

Huebert said the law and the case history work to Lincolnshire’s advantage.

Seventh Circuit Chief Judge Diane Wood, who was appointed by President Bill Clinton, “asked challenging questions of both sides,” Huebert said in an email to The Daily Signal.

At the Heart of the Case

“We are optimistic that we’ll prevail, because the law is on our side,” Huebert said, adding:

Home rule is indeed at the heart of the case. The Illinois Constitution gives home-rule municipalities, such as the village of Lincolnshire, broad authority to enact laws that they believe will benefit their local jurisdictions. And the unions don’t even dispute that Lincolnshire’s home-rule powers under state law include the authority to enact a local right-to-work ordinance.

Under Supreme Court precedent, if Congress wants to interfere with states’ internal arrangements for exercising their power, it must make a clear statement that it’s doing so. Congress didn’t do that in the National Labor Relations Act, so Illinois retained its authority to delegate its power to enact right-to-work laws to local governments.

Brent Yessin, a labor lawyer who has advised counties considering right-to-work measures in Kentucky, Pennsylvania, and New Mexico, said he sees a potential for the Supreme Court to eventually enter the fray as localities pass more ordinances.

The counties in those states where he has served as an adviser, and in others, such as Ohio and Maryland, “clearly have the power to pass ordinances,” Yessin said in an email to The Daily Signal. “The overwhelming authority at the Supreme Court and circuit court level is that states can delegate their authority to regulate forced union dues, and the only issue is whether they have done so.”

Although he said he isn’t familiar with the situation in Illinois, Yessin said he is encouraged by legal developments in New Mexico. In January, the Sandoval County Commission passed a right-to-work bill in a 3-1 vote with one abstention.

Just a few weeks later, the New Mexico Federation of Labor filed suit. The union released a statement detailing some main arguments in the lawsuit, which identifies the International Brotherhood of Electrical Workers Local 611 and United Food and Commercial Workers Local 1564 as the two organizations most affected.

In analyzing the unions’ arguments, Yessin said, he finds that they made a critical concession.

“In New Mexico, two unions concede that the state can delegate their power to prevent forced dues and are pinning their hopes on a finding [that] the state hasn’t actually done so,” he said. “But that legal retreat signals a win for cities and counties that want to create jobs even when their legislators can’t muster the courage to do so.”

Jay Block, a Sandoval County commissioner and early supporter of right-to-work laws in New Mexico, told The Daily Signal that Otero County and McKinley County are considering their own ordinances. Legislation could be introduced within a few weeks, he said.

“We are asking elected officials across the state to stand up to forced unionism and to stand up for the full potential of this state to be an economic powerhouse,” Block said. “We are going one county at a time.”

On the opposite side of the country, the new right-to-work law in Seaford, Delaware, has not been challenged in court.

“We are a small town without a lawsuit, which is a great thing,” Mayor David Genshaw said in an email. “Right now, we are working on spreading the word, because we are finding there are many people in our own state who don’t know about the law.”