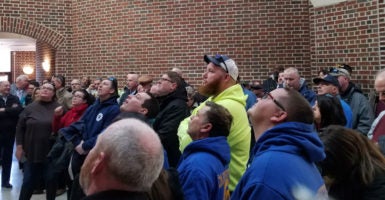 GEORGETOWN, Delaware—Officials in one of Delaware’s three counties rejected right-to-work legislation Tuesday, shortly after the county attorney detailed his legal opinion and predicted a thicket of costly court challenges to the law from labor unions.

Sussex County Council member Rob Arlett, who has spearheaded the proposal, told The Daily Signal that the council backed down in the face of those legal threats from unions.

“Today, the Sussex County Council made a decision based on fear of litigation,” Arlett said in a phone interview after digesting the 4-1 defeat of his bill. “I’m encouraged by the outpouring of support from the business community. I’m disappointed the council decided to uphold the status quo.”

Arlett was the only one of the council members, all Republicans, to vote yes on the right-to-work measure.

A total of 28 states and the territory of Guam now have right-to-work laws, with Kentucky, Indiana, Michigan, Wisconsin, and West Virginia making the move since 2012.

Delaware last month became the only state in the Northeast and mid-Atlantic with a local right-to-work law on the books. The city council of Seaford, not content to wait on the Sussex County Council to act, passed its own ordinance Dec. 12.

Sussex County officials had put off action Tuesday after dozens of union members turned out in force at government offices to oppose the legislation during a public hearing. The Sussex council then asked for a formal opinion from the county attorney, J. Everett Moore, pending this week’s 4-1 vote.

The International Brotherhood of Electricians was among unions celebrating the defeat of the bill on social media:

“What we want regardless of the color of our shirts is we all want jobs, and we all want the best for our families,” Arlett said before casting his lone vote in favor of the ordinance.

“We have to do something as a community and as a council to attract new industries, I think all sides agree to that,” he said. “The question before us today is, is this a tool in that toolbox as a community that we should consider?”

“My No. 1 concern is that right to work lowers wages,” Kat Caudle, a member of the American Federation of State, County and Municipal Employees, told The Daily Signal before the hearing.

“Workers should have the right to bargain for wages,” Caudle said, “and unions bring equality to this process.”

Arlett at first moved to delay action but the other council members also rejected that.

Based on testimony and the public record, Arlett said, it is evident to him that “people want this.” He also recognized that “quite a few others [are] in opposition.”

“I believe in the power of choice and to me, if it’s worthy for six school districts in this county, why isn’t it worthy in the private sector?”

Six of the eight school districts in Sussex County are right-to-work entities in the public sector, with no requirement for teachers to pay fees to the union.

“That’s why there is a court system, to determine what is lawful and not lawful,” Arlett said. “On the merits of economic development … if it has the ability to attract jobs, then we should consider it and let the courts make their decision as they see fit. So, for that reason alone, based on the testimony and the record, I will vote in favor of this.”

A big win today for workers in Sussex County, Delaware. In a 4 to 1 vote, the County council voted to reject the misguided right-to-work ordinance.@47abc https://t.co/MheBc81Uqf

But the testimony and opinion of Moore, the council’s attorney, carried the day.

Moore repeated his concern that Delaware’s home rule statute did not delegate authority to the council to adopt a right-to-work law. Sussex County would be drawn into legal challenges at both the state and federal level that could prove costly,  he said.

“My opinion is that a Delaware court is unlikely to uphold the ordinance in its current form,” Moore said.

The county attorney also warned council members that if they did go forward with the ordinance and accept pro-bono legal coverage from outside the state, they would need to confer with the State Public Integrity Commission, whose rules cover payment to government employees.

Burton also spoke at length, saying he voted no because he was convinced by Moore that the county would incur legal costs that would detract from the council’s ability to perform its primary functions.

“If we adopt this ordinance, we will be in expensive, time-consuming litigation,” the council member said.

Given the need to attract new jobs, Burton said, his vote was “one of the hardest decisions” of his career.

Burton expressed concern that enforcement of a controversial ordinance would burden the county with additional costs.

Vincent, the council president, said he shared Burton’s concerns about the legalities and also said the council could have handled the matter better procedurally. Despite what some critics charged, Vincent said, there was “no stonewalling” by the council.

Despite voting no,  Cole said he favored the concept of right to work but was not convinced the council had the legislative authority to move forward.

“I wish there was a way I could vote yes,” Cole told fellow council members.

Theodore Kittila, a lawyer speaking for the Caesar Rodney Institute, a free-market think tank based in Wilmington, told council members last Tuesday that Sussex County has the authority to pass such a law under authority delegated by the 1970 statute. Kittila expanded on this point, citing several cases, in a written legal opinion that is part of the public record.

Kevin Fasic, a Wilmington-based lawyer who specializes in construction law, said during the council’s Oct. 24 meeting that a 6th Circuit Court of Appeals ruling opened the door for local right-to-work laws in Delaware and other parts of the country.

As The Daily Signal has previously reported, the U.S. Supreme Court turned away a legal challenge to the local right-to-work ordinance in Hardin County, Kentucky, permitting the 6th Circuit ruling to stand.

The 6th Circuit covers Kentucky, Michigan, Tennessee, and Ohio; Delaware falls within the 3rd Circuit, which has not ruled on the merits of local right-to-work laws.

If the 3rd Circuit were to rule in conflict with the 6th Circuit, the case likely would move up to the U.S. Supreme Court. But Fasic noted during the October meeting that the high court may have signaled its intention to uphold local right-to-work laws last year when it rejected a petition from labor unions challenging the Kentucky law.

But on Tuesday, Moore insisted the legal questions are not entirely the same.

“Because some other county has done this, doesn’t mean that we can,” Moore said. “We have to look at the underlying legislation.”

While the ruling out of the 6th Circuit “may influence” the 3rd Circuit, it doesn’t “control” either the 3rd Circuit or the U.S. Supreme Court, Moore told council members.

I don’t regret the decision to introduce the ordinance, because if I hadn’t I’m certain the city of Seaford would not have moved forward with their own ordinance. This fight will continue.

We now have a public record and public testimony and we have people on record. I’m encouraged by the outpouring of support from the business community. I’m disappointed the council decided to uphold the status quo. This shows how difficult change can be. But this is just the beginning.

In New Mexico, Sandoval County has pursued its own right-to-work legislation amid intense union opposition. The County Commission is set to vote Jan. 14 on the bill.

Ken McIntyre contributed to this report, which has been updated to include Arlett’s later remarks.