If Trump Wants to Buck G-7 Leaders, He Should Fight This Multilateral Tax Increase 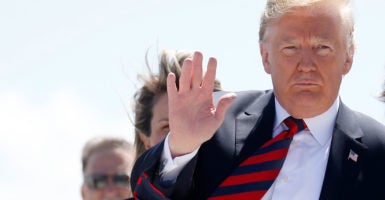 President Donald Trump has already shaken up this weekend’s G-7 meeting in Canada by threatening to impose tariffs on other G-7 countries.

Although picking a fight with America’s closest trading partners is a high-risk strategy, the president would be well-advised to continue his disruptive tactics when it comes to another item on the G-7 agenda: the “base erosion project.”

Specifically, he should oppose draft language in the G-7 “Chair’s Summary” that endorses the Organization for Economic Cooperation and Development’s base erosion project, which is aimed at increasing taxation levels in G-7 countries.

As The Heritage Foundation recently reported, this project and the resulting Multilateral Convention to Implement Tax Treaty Related Measures to Prevent BEPS are nothing more than international tax regulators’ latest attempt to increase taxes on international businesses.

The OECD proposal aims to centralize and harmonize global tax rules as a way to increase effective tax rates on international firms, the majority of which are actually American businesses.

U.S. opposition to the project is certainly not unprecedented. The Obama administration actually declined to sign onto the treaty implementing the new tax regime.

Following the historic U.S. tax reform in 2017, the U.S. should continue to lean into the strategy of making businesses want to grow and produce in America. Our new lower corporate tax rate and other business reforms like “expensing” make the U.S. one of the most attractive new investment opportunities in the world.

The OECD’s base erosion project takes the opposite tack. Rather than attracting commerce with business-friendly policies, it creates new barriers, making it harder of businesses to leave and do business elsewhere.

The path to economic prosperity is through lower taxes, not better mechanisms for collecting unsustainably high taxes on businesses trying to escape for other countries.

Although it did not sign onto the full base erosion project, the Treasury Department under the Obama administration did promulgate regulations to comply with new OECD country-by-country reporting requirements.

Country-by-country reporting is a new international system to implement the centralization and automatic exchange of taxpayer information with countries around the world.

By making it clear that America does not support the OECD or G-7’s goal of raising business taxes, the Trump administration will send a strong signal to the global community: America is open for business.