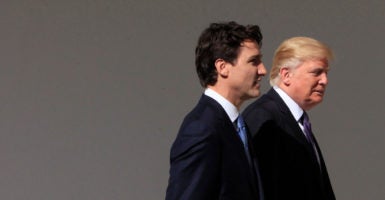 The Group of Seven was created during the Cold War by the United States so that the leading market-based Western democracies (Canada, France, Germany, Italy, Japan, and the United Kingdom) could join it to preserve economic freedom, increase global prosperity, and defeat communism.

After the Soviet Union’s collapse, a hopeful G-7 at first welcomed its former enemy (G7+1), but by 2014 had expelled Vladimir Putin’s Russia, which had proved itself aggressive and anti-Western.

Now it’s 2018, and President Donald Trump is looking for ways to contain communism again. This time, the threat is from China—which, under President Xi Jinping, has doubled down on what it calls “socialism with Chinese characteristics for a new era.”

Xi has promised that, in exchange for unlimited authoritarian power, his “China 2025” program will result in a leap forward to global leadership in the cutting-edge technologies that will define the American economy of the 21st century, among them aircraft fabrication, robotics, semiconductors, electric vehicles, biotechnology, artificial intelligence, and quantum computing.

Other G-7 leaders share Trump’s concern about China, but they are more immediately concerned about the tactics the president has deployed—levying tariffs not just against China, but against their countries, too.

Against this backdrop, G-7 leaders will meet this weekend in Canada. The other six fired a warning shot, issuing a statement cautioning the U.S. of consequences if it persists with tariffs on steel and aluminum imports from Canada, the European Union, and other countries.

French Finance Minister Bruno Le Maire was quoted as calling the upcoming meeting “far more a G-6 plus one than a G-7”—with that “one” being the United States, the natural leader of the G-7.

Certainly, Trump is right to seek the best possible terms of trade for the nation he is leading as it confronts the new global economic realities. But imposing steel and aluminum tariffs on America’s G-7 partners in clear violation of the rules of the World Trade Organization—even if done only as a negotiating chip in a grand trade deal—is a dangerous and counterproductive way to obtain them.

For example, the United States and Canada have partnered to exploit their tremendous energy resources to lower energy costs for American workers and consumers, reduce dependency on imported energy from politically volatile places such as the Middle East and Venezuela, and generate high-paying jobs and value-added exports of refined hydrocarbons.

To achieve those goals, U.S. and Canadian energy companies rely on steel and aluminum to build infrastructure.

The steel used to build some pipelines, however, is only produced abroad. It would be years before domestic producers could manufacture them, and the U.S. energy sector would lose its competitive edge in the meantime.

Overall, studies cited by The Heritage Foundation’s Stephen Moore have shown that tariffs to save roughly 140,000 American steel jobs would put at risk 5 million manufacturing and related jobs in U.S. industries that rely on steel inputs.

That damage assessment does not include additional negative impact from the retaliatory tariffs against American-made products announced by the EU, Canada, and Mexico.

As Moore noted, previous Republican presidents, including Ronald Reagan and George W. Bush, also experimented with the steel tariffs, but later withdrew them and regretted their decisions.

Trump demonstrated outstanding leadership in his courageous decisions to end U.S. participation in the Iran nuclear deal and the Paris climate agreement—both of which were championed by other G-7 leaders.

He also signed historic reform legislation to cut Americans’ taxes at a time when other G-7 leaders are pushing for higher taxes.

The president should not squander the moral high ground on which those decisions were made, however, by making wrongheaded moves on trade that will weaken the U.S. economy.

A unified G-7 that remains faithful to the values of market-based Western democracy and economic freedom can be America’s ally in the economic battles that lie ahead.