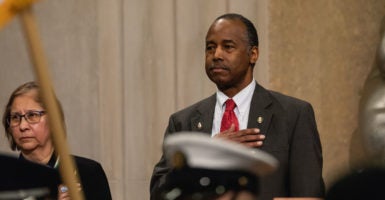 Carson announced the opening of the first “EnVision Center” in Detroit to assist families in their fight to become self-sufficient and said the only way America can compete on a global scale is to help the less fortunate.

“There’s a verse in the Bible that says without a vision the people perish. And there are a lot of people who really don’t have a vision—have become somewhat hopeless and just doesn’t think—they don’t think life is going to be great to them,” Carson said. “There are actually a lot of resources in our society and a lot of people with very good hearts who would love to do things, but there is not a mechanism to do it. So what we’re doing is bringing in juxtaposition the resources to the need. And this is going to be done in communities throughout the country.”

“This is the largest coordination of all of those things in an attempt to provide the wrap-around services that are necessary for success in our society,” he continued. “We only have 330 million people. China, India have four times that many people. We will never be able to compete into the future if we don’t begin to develop all of our people.”

Carson said America is strong and cannot be defeated from the outside, but can be brought down from within. He accused certain Americans of trying to divide the country and encouraged communities to reject political division and manipulation.

“This country is extremely strong. And it cannot really be brought down from the outside. Very much like the Roman Empire. But it can be destroyed from within. And we have elements who are driving wedges between people on the basis of race, income, religion, gender, political affiliation. You name it,” Carson concluded. “There is never a good outcome to that in a society. And we have to start looking beyond politics and not allow ourselves to be manipulated.”