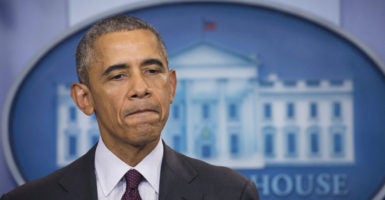 “The Obama administration misled the American people and Congress because they were desperate to get a deal with Iran,” says Sen. Rob Portman. (Photo: Amanda Lucidon/ZUMA Press/Newscom)

The Obama administration secretly allowed Iran to access the U.S. financial system to convert assets to U.S. dollars, despite repeated assurances that it would not permit such transactions, a new Senate subcommittee report alleges.

“The Obama administration misled the American people and Congress because they were desperate to get a deal with Iran,” Sen. Rob Portman, a Republican from Ohio and chairman of the Senate’s Permanent Subcommittee on Investigations, said in a statement on the new report, according to Fox News. The GOP-authored subcommittee report follows a yearlong investigation into alleged misconduct.

The Obama administration reportedly granted a bank in Oman operating on behalf of Iran a “license” that would permit the conversion of Iranian assets worth around $5.7 million to U.S. dollars and then to euros through the U.S. financial system shortly after the Joint Comprehensive Plan of Action (JCPOA), more commonly known as the Iran nuclear deal, went into effect.

“On Feb. 24, 2016, the Treasury Department issued a specific license to Bank Muscat to authorize the conversion of Iran’s rials to euros through ‘any United States depository institution,” a draft of the Senate report read. “Even after the specific license was issued, U.S. government officials maintained in congressional testimony that Iran would not be granted access to the U.S. financial system.”

The conversion process was apparently prohibited by sanctions, and Obama administration officials, such as former Secretary of the Treasury Jack Lew, reportedly regularly denied that the administration permitted such transactions, The Hill reports.

“As the Treasury and State Department worked behind the scenes to help Iran access the dollar, the message to Congress remained the same,” the new report read, adding that the message was simple: “The JCPOA did not allow Iran to access the U.S. financial system.”

Iran’s assets were never converted, though, as the Obama administration was reportedly unable to find a compliant American bank to execute the conversion.

A former administration official told Fox News that the Senate subcommittee’s findings are inaccurate, asserting that Iran never had any improper access to the U.S. financial system.

“This specific license was in fulfillment of JCPOA commitments to give Iran access to pools of its money held overseas. It was aimed solely to allow the movement of Iran’s own funds stranded at an Omani bank into euros at a European bank, where Iran could then make use of them,” the former official explained.

President Donald Trump shattered former President Barack Obama’s legacy nuclear deal with Iran in early May when he announced that America will withdraw from the JCPOA, thus fulfilling a campaign promise.