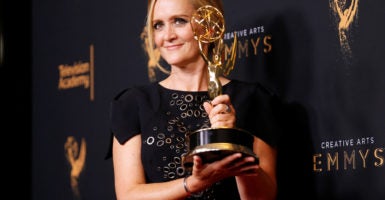 “I think that TBS should think twice about keeping her on the show,” says the Media Research Center's Christian Robey of comedian Samantha Bee. (Photo: Danny Moloshok/Reuters/Newscom)

Autotrader and State Farm both announced that they will be not be showing their advertisements on Bee’s show.

State Farm told The Wrap in a statement that “We have asked TBS to suspend our advertising in the program and are reviewing any future placements. We constantly review programs to ensure alignment to our programming guidelines and brand values.”

Bee made the comment about Ivanka Trump during a segment discussing President Donald Trump’s immigration policies: “Let me just say, one mother to another, do something about your dad’s immigration practices, you feckless c—. He listens to you. Put on something tight and low cut and tell him to f—ing stop it.”

I would like to sincerely apologize to Ivanka Trump and to my viewers for using an expletive on my show to describe her last night. It was inappropriate and inexcusable. I crossed a line, and I deeply regret it.

On Friday, the president weighed in.

Why aren’t they firing no talent Samantha Bee for the horrible language used on her low ratings show? A total double standard but that’s O.K., we are Winning, and will be doing so for a long time to come!

“Her remarks were vile, horrible, and inappropriate,” Christian Robey, political director of the Media Research Center, told The Daily Signal. “I think that TBS should think twice about keeping her on the show.”

“There is a double standard in the way the media has covered this story. I’m uncomfortable that they portray Rosanne as a mainstream conservative when she is not,” said Robey. “Conservatives see this for what it is and it’s a veiled attack against them.”