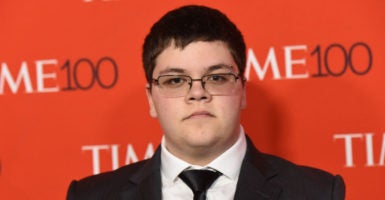 “After fighting this policy since I was 15 years old, I finally have a court decision saying that what the Gloucester County School Board did to me was wrong and it was against the law,” Gavin Grimm, now a Gloucester County Public Schools graduate, says. (Photo: Jennifer Graylock/Sipa USA/Newscom)

A federal judge in Newport News, Virginia, ruled Tuesday that federal law allows a transgender teenager to sue his school district for barring his access to the bathrooms of his preference.

Though the ruling is not a decision on the merits of the controversy, U.S. District Court Judge Arenda Wright Allen’s decision is a boon to the LGBT community, as it found the transgender student is covered by federal civil rights law.

The case was occasioned when Gavin Grimm, a student in the Gloucester County Public Schools, began using the men’s bathroom. Grimm, who is now 19 and has since graduated, was born female but identifies as male. Gloucester County schools require transgender students to use alternative bathrooms.

The dispute reached the U.S. Supreme Court, but the justices ultimately dismissed the case when President Donald Trump’s administration rescinded the Obama-era guidance.

The decision endorses a relatively new civil rights theory arguing discrimination against trans people is already unlawful as a matter of federal law. Title IX and other federal statutes like the Civil Rights Act forbid discrimination on the basis of sex. Such discrimination includes gender stereotyping or discriminating against individuals for failing to conform to expectations about sex. The Supreme Court affirmed this reading of the law in a 1988 case, Price Waterhouse v. Hopkins.

Since discrimination against LGBT groups arises from gender stereotyping—which is already unlawful—proponents of the theory say anti-trans discrimination in the workplace and in public schools is already illegal.

“After full consideration of the facts presented and the compelling scope of relevant legal analyses, the court concludes that Mr. Grimm has sufficiently pled a Title IX claim of sex discrimination under a gender stereotyping theory,” the judge wrote.

The court also found Grimm is protected by the Constitution’s guarantee of equal protection. Laws that treat individuals differently on the basis of sex are subject to high judicial scrutiny and are only permissible if they serve an important government interest. The school board said its policy protects its interest in student bathroom privacy, but Allen disagreed.

“The policy was not substantially related to protecting other students’ privacy rights, because there were many other ways to protect privacy interests in a non-discriminatory and more effective manner than barring Mr. Grimm from using the boys’ restrooms,” Allen wrote. “The board’s argument that the policy did not discriminate against any one class of students is resoundingly unpersuasive.”

Speaking after the decision, Grimm said he felt relieved and vindicated.

“After fighting this policy since I was 15 years old, I finally have a court decision saying that what the Gloucester County School Board did to me was wrong and it was against the law,” he told reporters.