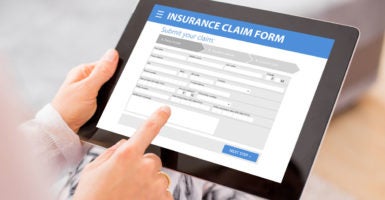 At the end of 2017, enrollment in individual market coverage stood at the lowest level since before Obamacare. (Photo: grinvalds/Getty Images)

The latest data show that, as of the end of 2017, enrollment in individual market coverage stood at 15.3 million—the lowest level since before Obamacare.

Furthermore, the coverage drop-off is occurring among those who do not qualify for subsidies under Obamacare, as there has been no decrease in the number of individual market enrollees receiving Obamacare subsidies.

While the department has not yet published figures for the end of 2017, its most recent report stated that an average of 8.6 million enrollees received premium subsidies during the first half of 2017.

Thus, subsidized Obamacare enrollees currently account for over half of the individual health insurance market, yet that market is now only 28 percent larger than it was before Obamacare. Furthermore, that market has been shrinking since it peaked in 2015.

Taken together, these statistics have a number of implications.

To start with, they confirm that, by driving up premiums for coverage, Obamacare is increasingly driving unsubsidized customers out of the individual market.

What is less clear is where those customers have gone.

It is likely that most of the customers who exited the market are middle-income, since they don’t qualify for Obamacare’s low-income premium subsidies, and self-employed, since they had been buying their own health insurance.

Some may have given up on self-employment and obtained jobs with employer-sponsored health insurance. If so, then Obamacare has made the phenomenon of “job lock” worse, not better.

Others may have remained self-employed, but instead given up on health insurance—in which case, Obamacare is now uninsuring the previously insured.

Critics claim that recent moves by the Trump administration to reverse the Obama administration’s attempt to eliminate short-term health insurance plans (which don’t have to comply with Obamacare’s mandates), and to expand the availability of association health plans to the self-employed, will “destabilize” the market.

Yet, the accumulating data shows that the market was already significantly destabilized prior to the Trump administration taking office. Keep in mind that 2017 health plans and premiums were already set in October of 2016, and that the 2017 open enrollment period ran from the week before the election through the week after the inauguration.

Consequently, the Trump administration’s recent actions will actually offer much-needed alternatives to those who have already left the market.

If Congress wants to help both those who have already fled and those who are are still stuck with Obamacare’s “new normal” of escalating premiums, soaring cost-sharing, limited plan choice, and increasingly restricted access to doctors and hospitals, it needs to get back to work on undoing the damage done by Obamacare to the individual health insurance market.