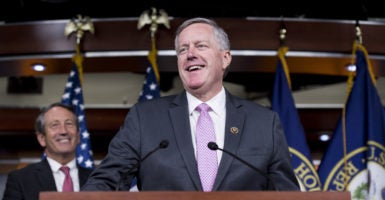 For Rep. Mark Meadows, R-N.C., the success of House Republican leaders’ Obamacare repeal and replacement plan, as well as the success of President Donald Trump, hinges on one thing: the cost of insurance premiums.

“We ultimately will be judged only by one factor: if insurance premiums come down,” Meadows told The Daily Signal. “If the average person who is paying their bill looks at their bill, and it continues to stay down over the next three to four years, then this president will be applauded. If they continue to go up and health care costs continue to go up, then he won’t.”

For Meadows, who chairs the House Freedom Caucus, lowering premiums has emerged as his top priority for health care reform.

But as it stands, the North Carolina Republican said, the House GOP’s replacement plan leaves in place the very provisions of Obamacare that many believe caused premiums to rise: insurance regulations and mandates.

But conservative lawmakers and groups quickly criticized the bill for not repealing enough of the health care law, and for creating what they call a new entitlement program in the form of refundable, age-based tax credits.

Since then, the White House has held frequent meetings with conservatives such as Meadows to discuss their issues with the bill and what provisions they would like to see changed.

And for the Freedom Caucus chairman, a repeal of the insurance mandates and regulations could be the key to getting him closer to “yes.”

“That particular item would have a lot more sway with me than perhaps any other issues that we’re discussing,” Meadows said in an interview with The Daily Signal.

Health policy experts and the Congressional Budget Office said the mandates caused premiums to rise and, anecdotally, consumers complained that the mandates forced them to purchase plans that included services they would never use.

The mandates and regulations long have been a target of conservatives, who want to see Republicans undo those provisions of Obamacare in the bill repealing other major components of the health care law.

But the replacement plan rolled out last week noticeably leaves in place the essential health benefits mandate and other insurance regulations—requiring coverage for pre-existing conditions and allowing dependents to remain on their parents’ plan until age 26, for example.

“[Leadership] wants us to vote for something that, if that’s all we get, insurance premiums will go up,” Meadows said. “I’m not willing to take a risk on behalf of the people I represent to do that and get a situation where we’ve repealed part of [Obamacare], replaced part of it, and with that, we have premiums going up.”

Meadows, along with other conservatives in the roughly 40-member Freedom Caucus, has come out swinging against Republican leadership’s Obamacare replacement plan.

Many disagree with the proposal’s phasing out of expanded eligibility for Medicaid and allowing states, as of 2020, to enroll those who are newly eligible at a reduced federal matching rate.

So far, the bill faces an uphill battle in the House, where it needs 218 votes to pass.

Republicans control 237 seats in the lower chamber, so 19 “no” votes would cause the bill to tank.

Since House Speaker Paul Ryan unveiled the Obamacare replacement plan last Monday, the White House has held meetings with conservative lawmakers and groups to discuss their issues with it.

Meadows and Rep. Jim Jordan, R-Ohio, met last week with Trump for several hours, and the White House will continue its charm offensive over a night of bowling this week with more Freedom Caucus members.

The Freedom Caucus chairman said his discussion with Trump was “one of the best conversations that a member could have with the president of the United States,” adding that he was pleased to see that Trump was willing to negotiate.

“We had real discussions about how we can make the plan better, how we can give consumers more choices in the insurance market, because this repeal and replacement doesn’t do that until we get to phase three,” Meadows said, referencing the three-pronged approach Republican leaders and the White House are taking to repealing and replacing Obamacare.

The three phases are: pass the American Health Care Act, make further changes to the health insurance market through administrative action by Health and Human Services Secretary Tom Price, and then implement more replacement provisions through other legislation.

But though the White House has continued to listen to conservative lawmakers—White House budget director Mick Mulvaney, a former Freedom Caucus member himself, attended the group’s weekly meeting last week and has stayed in touch with members—conservatives have a less willing negotiating partner in Ryan.

Republicans are using a budget tool called reconciliation to fast-track the Obamacare replacement plan through the Senate. Ryan has maintained that any changes made to the bill could run afoul of Senate rules governing the reconciliation process.

“Everybody doesn’t get what they want, but we’re getting much better policy here,” Ryan said Sunday on CBS’ “Face the Nation.”

“Let me put it this way: Obamacare is collapsing,” the Wisconsin Republican said. “If we just did nothing, washed our hands of the situation, we would see a further collapse of the health insurance markets.”

“So we feel an obligation to step in front of that collapse and replace this law with one that works, that has more freedom,” he continued. “Some people would like it to be done a little bit differently.”

@SpeakerRyan on AHCA critics: "They'd like to see us continue make Americans buy what we say they should buy. We don't agree with that." pic.twitter.com/MyXy1XVDnh

But Meadows disagrees with Ryan on both points.

The North Carolina Republican said GOP leaders did ask for input from all House Republicans on the “Better Way” plan, but that differs from the actual legislation rolled out.

“There’s a big difference between putting together a visionary document that had some goals and principles, and crafting legislation that everyone can get behind,” he said. “It’s like saying you’re for school choice, but do you do that with vouchers or scholarships or tax credits?”

The Freedom Caucus chairman also disagreed with the notion that making changes to leadership’s Obamacare replacement plan, such as including a repeal of the insurance mandates, would violate the rules of reconciliation, a process that may be used only on matters affecting taxes, spending, or the deficit .

“We’re making assumptions on what will pass and what will not pass without it being adjudicated,” Meadows said. “We ought to try.”

Chris Jacobs, a Republican health policy expert and founder of Juniper Research Group, said there is an argument to be made that the insurance regulations and mandates can, and should, be repealed through the GOP leadership’s proposal.

Jacobs pointed to a letter the Congressional Budget Office sent to then-Sen. Evan Bayh in 2009, as well as estimates from the Obama administration, that outlined the budgetary effects of Obamacare’s insurance regulations —a requirement reconciliation bills must satisfy.

“There’s no reason on the insurance regulations not to try [to repeal],” Jacobs, who worked for Vice President Mike Pence, then a congressman, when the original Obamacare debate was taking place, told The Daily Signal. “The idea of preemptively surrendering on the insurance regulations, it’s a question of is it … we can’t do this on reconciliation, or we just don’t want to?”