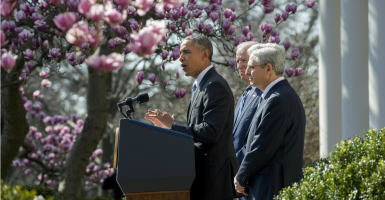 Conservatives raised the alarm that the nominee was unacceptable as word leaked that Merrick Garland, chief judge of the U.S. Court of Appeals for the D.C. Circuit, would be the president’s pick.

Garland “would be a reliable fifth vote for a laundry list of extreme liberal priorities,” the Judicial Crisis Network wrote in a preemptive statement. Later, during a conference call with reporters, the group’s chief counsel, Carrie Severino, said “no one should be surprised.”

Shortly after Obama ended his remarks in the White House’s Rose Garden, Severino described Garland’s nomination as part of the administration’s effort to “create an unassailable voting block for the court to run along with a liberal agenda.”

Other critics announced their opposition, blasting Garland along traditional conservative lines: guns, pro-life issues, and the size of government.

Pointing to his judicial record on Second Amendment issues, the National Rifle Association labeled the judge “the most anti-gun nominee in recent history.”

Looking at past cases involving the Environmental Protection Agency, government watchdog  America Rising Squared complained he had “a long record of deference to unaccountable government bureaucrats.”

And citing the president’s record, the Susan B. Anthony List branded him part “of a voting bloc on the court that consistently upholds abortion on demand.”

The unifying fear of each group is that, Garland, 63, would tip the ideological balance of the bench for years to come. And according to The New York Times, that fear is justified. If confirmed the judge would help “create the most liberal Supreme Court in 50 years,” the newspaper reported.

Analysis of Garland’s record by The New York Times places Garland to the right of Justices Ruth Bader Ginsburg and Sonia Sotomayor but to the left of Justice Elena Kagan and Stephen Breyer.

The judge won some limited praise from one leading critic.

“Merrick Garland’s has a very high intellect. He’s a very decent fellow. The only criticism I have over him is that he’s a liberal and he would move the court markedly to the left,” said Ed Whelan, president of the Ethics and Public Policy Center.

A graduate of Harvard Law School, he clerked in 1978 for Supreme Court Justice William J. Brennan, a liberal stalwart. Later, while serving as a Justice Department lawyer, he helped coordinate the investigation of the Oklahoma City bombing in 1995.

Appointed that year by President Bill Clinton to the Court of Appeals for the D.C. Circuit, he was confirmed by a Senate vote of 76-23 in 1997.

Obama’s announcement escalates an ongoing staring contest between the White House and Senate Republicans. The GOP promised not to blink in its pledge to blockade any Supreme Court nominee until a new president takes office.

“I simply ask Republicans in the Senate to give him a fair hearing and then an up or down vote,” Obama said. “If you don’t, then it will not only be an abdication of the Senate’s constitutional duty, it will indicate a process of confirming judges that is beyond repair.”

Attempting to cast Garland in a centrist light, the president described the judge as a man who has earned “the respect and admiration of leaders from both sides of the aisle.” One month earlier, Feb. 16, Obama told CNN he was looking for a “consensus candidate.”

But Republicans on the Senate Judiciary Committee, the body charged with evaluating judicial nominees, say they aren’t flinching. One aide told The Daily Signal that Garland’s nomination “changes nothing.”

The Republican rebuttal Wednesday focused more on appeals to principle than examination of Garland’s judicial philosophy.

“The American people may well elect a president who decides to nominate Judge Garland for Senate consideration,” Majority Leader Mitch McConnell, R-Ky., said in a floor speech in the afternoon. “The next president may also nominate someone very different. Either way, our view is this: Give the people a voice in the filing of this vacancy.”

Not all outside conservative voices were as supportive of that position, though.

And in a Time magazine article, Trevor Burrus of the libertarian Cato Institute described the judge as “the best conservatives could have reasonably hoped for from this president.”