Our Approach to Severe Mental Illness Endangers Everyone 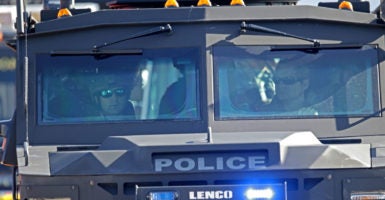 The problem of severe mental illness is increasingly being dealt with by police and law enforcement instead of being treated appropriately, experts say. (Photo: John Mccall/Zuma Press/Newscom)

Americans pour billions of their taxpayer dollars into treating mental illness, but the spending isn’t addressing the real crisis.

As The Daily Signal previously reported, a massive deinstitutionalization of mentally ill people occurred in the past half-century.

>>> How Better Treatment of the Mentally Ill Could Reduce Mass Shootings

In an article in National Review, the Treatment Advocacy Center’s executive director, John Snook, writes about how dramatic the move to deinstitutionalization has been:

This change is having serious repercussions for the country.

A recent Heritage Foundation panel addressed this problem, outlining the depth of the crisis and how it is putting the mentally ill and the rest of society at increased risk.

Dr. Sally Satel, a psychiatrist and resident scholar at the American Enterprise Institute who is an expert in mental health policy, explained how, as a nation, we have muddled what it means to be mentally ill.

Those with severe mental illness “can’t really function and participate in life,” she said. Worse, they increasingly are incarcerated instead of being treated.

“An estimated 1 in 5 people in homeless shelters and approximately 20 percent of those in jail or prison were classified as having a severe mental illness,” Satel said.

These are individuals with conditions such as schizophrenia, crippling post-traumatic stress disorder that prevents them from leaving home, and other debilitating illnesses.

“Severely mentally ill people are the ones who are populating our jails, unfortunately because our system clearly has problems; the infrastructure of the mental health system is bad in many places,” Satel said.

This is the most vulnerable population that is not getting proper treatment, in part because we have misallocated resources to treat conditions that are a lot less serious.

DJ Jaffe, executive director of Mental Illness Policy Org, a nonprofit organization devoted to informing the public about serious mental illness, said our misguided policies are hurting people with mental illness and putting everyone at risk.

Jaffe said we are failing to make a distinction between a generally bad mental state and severe mental illness, which is about more than just being sad or depressed.

He brought up the case of President Ronald Reagan’s attempted assassin, who had delusions that shooting the president could land him a date with a Hollywood actress.

“John Hinckley shot President Reagan because he knew for a fact that that was the best way to get a date with Jodie Foster,” Jaffe said. “That is serious mental illness, and we are failing people with it.”

Dealing with the issue is not just about spending more money.

The problem, Jaffe said, is that the system stopped focusing on the seriously mentally ill.

Currently, 35 percent of them receive no treatment at all, he said.

The solution, he said, is to shift priorities instead of just spending more money: Decrease mental health spending and start spending to address severe mental illness.

The mental health industry has fueled this problem, he said, by misleading the government and the American people.

“After every headline-grabbing act of violence like a Parkland or a Virginia Tech, the industry tries to convince government to not take steps to reduce violence by the mentally ill,” Jaffe said. “They pull out their favorite claim: ‘The mentally ill are no more violent than others.’”

This is nonsense, Jaffe said, and is based on cherry-picking the data in the studies. He said the actions of the health care industry prove its belief that the severely mentally ill are more dangerous:

The studies show treatment works, no more, no less. And the industry knows the mentally ill are more violent than others. Psychiatric units are locked, cancer units aren’t. Psychiatric nurses wear panic buttons, those in heart units don’t. Outreach teams go out in pairs for their own safety.

The mental health industry is soliciting contracts to train police how to deescalate in situations involving the mentally ill, not people with psoriasis. So of course the untreated mentally ill are more violent than others, and the industry has led us to ignore that.

Instead of treating these potentially dangerous individuals, the mental health industry focuses on addressing “stigma,” Jaffe said. But this isn’t the problem.

Our policies will have a healthy change when we start listing to the police, who have become the real experts on what is going on, Jaffe said.

People who should have been committed to institutions before they got dangerous are filling our prisons.

Police are forced to deal with these people, many of whom have become “frequent flyers” who continually have run-ins with authorities.

“What closing psychiatric hospital beds did was it moved people from hospitals to jails. There are 10 times as many incarcerated as hospitalized now,” Jaffe said.