How Better Treatment of the Mentally Ill Could Reduce Mass Shootings 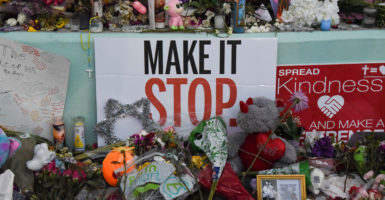 A significant number of mass shootings are conducted by people who are mentally ill.(Photo: Michele Eve/Newscom)

After a 19-year-old with a rifle killed 17 at Marjory Stoneman Douglas High School, President Donald Trump lamented how mental illness could have been a contributing factor in that massacre and many others.

Trump hit on an uncomfortable topic that the media, focused as usual on gun control, has given little coverage in the wake of the Feb. 14 shooting in Parkland, Florida.

America doesn’t have a gun problem. It’s enduring a crisis of inappropriately treated mental illness that began decades ago but has worsened in recent years.

The Daily Signal spoke about this growing problem with John Snook, executive director of the Treatment Advocacy Center, a nonprofit organization in Arlington, Virginia, dedicated to coming up with better solutions to treat mental illness.

Snook said officials planted the seeds of the mental health crisis in the 1970s, when they focused on deinstitutionalizing the mentally ill.

At the time, America “really moved away from the idea of providing care in large, centralized institutions,” Snook said, and “into a process that we would provide care in the community.”

In the years since, the number of inpatient psychiatric hospital beds for the mentally ill collapsed.

Last year, the U.S. Department of Health and Human Services appointed Snook to launch a federal initiative to tackle the growing problem of mental illness. The Treatment Advocacy Center has helped state legislatures change laws to address the problem more effectively and provides information about how to make more progress.

In an article in National Review co-authored with the founder of the Treatment Advocacy Center, E. Fuller Torrey, Snook writes about how dramatic the move to deinstitutionalization has been:

This dramatic shift was a mistake and flew in the face of scientific reality, Snook told The Daily Signal.

“What science has showed us is that, unfortunately, we will always need some level of hospitalization because the [mental] illness is like any other illness and sometimes you need inpatient care,” Snook said.

In the past 45 years or so, the mentally ill have been foisted on the justice system rather than being placed in institutions that could better tend to their needs, he said.

Ultimately, those with severe mental illness still end up in institutions, but the wrong ones.

“We’ve moved the most severely ill from hospitals into our jails and prisons,” Snook said. “By and large, the key outcome of the deinstitutionalization of people with mental illness has been a criminalization of their conduct.”

One reason for this overall shift has been a key philosophical change in American society. Snook called it a “well-intentioned but ultimately unhelpful view by treatment providers and by the system itself that we want to shift mental health care to basically make it an entirely voluntary process.”

The problem with this outlook, Snook said, is that mental illness specifically affects decision-making. So the mentally ill may not seek treatment even if it’s needed.

We did a pretty extensive survey of sheriffs across the country and just asked them what their experiences were with the mentally ill. Ninety-five percent said that they were dealing with people who had serious mental illness in their jails, and that those people are now much sicker than they were even 10 years ago. And I think that’s just the reality of a situation where a system neglects and ignores its most severely ill clients.

The problem is that not treating a significant number of the mentally ill doesn’t just lead to higher numbers of run-of-the-mill crimes, but has a direct connection to the debate over mass shootings.

While some contend that the mentally ill are no more dangerous or violent than anyone else, Snook said that science and statistics say otherwise.

“At least a third of these mass shootings that we’ve had in the past few years have really been the direct result of untreated serious mental illness,” Snook said. “And the way we talk about it is not that ‘The mental health system not providing them with mental health care leads to these instances of mass shootings,’ it’s that ‘The system is so broken, even people who obviously are in need of care may end up committing a mass shooting, aren’t able to get care.’”

Actually, there is a clear link between mass shootings & mental illness https://t.co/VYGQ3YFpR7

As an example, Snook cited the shooting at Fort Lauderdale-Hollywood International Airport in 2014, in which five people were killed and six wounded.

“When [the shooter] was in Alaska, the FBI actually said that this young man is mentally ill, he has delusions, he is a danger to himself and others, [and] took him to a mental health facility. And the facility let him go,” Snook said, adding:

Even when the FBI says this person needs care, there wasn’t enough done. And in an analysis a grand jury did of Alaska’s mental health system, they found what we see all across the country, that basically the system is incentivized to provide care to those less difficult to manage patients.

The Fort Lauderdale shooter and others like him often end up in prison after the fact because they never received the care they truly needed.

What is clear is that in the debate over mass shootings, the mental health issue can’t be ignored.

As Fox News reported in March:

In a study of 185 public mass shootings—defined as an incident in which four or more people are killed at a public location—from 1900 through 2017, criminologist Grant Duwe found that 59 percent were committed by people who had been diagnosed as mentally ill or showed signs of having a serious mental disorder before the attack.

If America wants to find ways to address the maladies that have led to a high number of these deadly incidents, it’s time we review how we treat those who are most likely to commit these crimes.