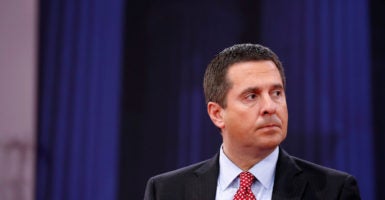 "We have yet to see any credible evidence or intelligence that led to the opening of this investigation,” Devin Nunes, chairman of the House intelligence committee, says. (Photo: Joshua Roberts/Reuters/Newscom)

Devin Nunes of California, chairman of the House intelligence committee, said the Trump campaign might have been set up by the federal government back in 2016.

“Let’s talk about how did this get started? You had Fusion GPS that was hired by the Democratic Party and the Clinton campaign to draw up a dossier on the president—or as the president was running for president,” Nunes said Tuesday on “Fox & Friends.” “What happened with that is that in [Glenn Simpson’s] testimony he mentioned that there was a source within the campaign.”

Nunes said Simpson, the head of Fusion GPS, told Congress he was being truthful about a mole within the Trump campaign and predicted the fallout would tarnish the FBI and Justice Department.

“Glenn Simpson said that in what was closed testimony. Then it became public. Now he’s confirmed that he was telling Congress the truth, which is probably a good idea,” Nunes continued. “We believe he was telling the truth. And what we’re trying to do is get the documents to figure out—did they actually have, what methods were used to open this counterintelligence investigation?”

“I think what it really means, I think it will look badly on the Department of Justice and the FBI on how they conducted this investigation,” Nunes said.

He also said the entire investigation into President Donald Trump lacked credibility from the start.

“I think if the campaign was somehow set up, I think that would be a problem. Right? If there were somehow meetings that occurred and all of this was a setup,” Nunes said. “Because we have yet to see any credible evidence or intelligence that led to the opening of this investigation.”