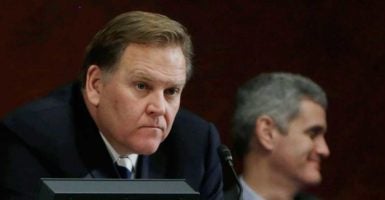 Many FBI agents previously supported former Rep. Mike Rogers, R-Mich., to be the FBI director in 2013, and could do so again after the firing of FBI Director James Comey. (Photo: Gary Carmeron /Reuters/Newscom)

There’s no shortage of familiar names floating to be the next FBI director, after President Donald Trump’s controversial firing of James Comey earlier this week.

“The president shouldn’t nominate anyone who has a clearly partisan background,” Ron Hosko says.

But it appears former Republican Rep. Mike Rogers of Michigan could be an early favorite among current and former agents.

The FBI Agents Association, or FBIAA, a group of more than 13,000 current and former FBI agents, endorsed Rogers to replace Robert Mueller for the post in 2013, but President Barack Obama instead nominated Comey.

While the agents group hasn’t made another official endorsement, members “still believe” Rogers meets the principles of what the association is looking for, said Joshua Zive, outside general counsel for the FBIAA, to The Daily Signal.

Rogers was a former FBI special agent from 1989 through 1994. After serving in the Michigan state Senate, he was elected to the U.S. House in 2000. While serving in House of Representatives, he was the chairman of the House Permanent Select Committee on Intelligence. He didn’t seek re-election in 2014. He has also been a regular commentator on CNN.

Zive said he believes Rogers would have credibility with the bureau’s agents. Additionally, he would know how to communicate effectively to the public about the scope of issues the FBI deals with, according to Zive.

Andrew McCabe, the acting FBI director who was the deputy director under Comey, testified on Capitol Hill Thursday. He is also reportedly a contender for the job, but could be challenged due to potential conflicts.

McCabe served as an FBI special agent since 1996, and was elevated to the No. 2 spot in 2016. However, while he was moving up in the FBI during the investigation of Hillary Clinton’s private email server, his wife Dr. Jill McCabe ran for the Virginia state Senate in 2015, with a financial boost of almost $500,000 from Common Good VA. The political action committee is controlled by longtime Clinton ally Gov. Terry McAuliffe.

In a statement to The Wall Street Journal last year, the FBI said, “Months after the completion of [his wife’s] campaign, then-Associate Deputy Director McCabe was promoted to deputy, where, in that position, he assumed for the first time, an oversight role in the investigation into Secretary Clinton’s emails.”

“It needs to be somebody independent,” said Ron Hosko, the FBI’s former assistant director of the criminal investigative division and now president of the Law Enforcement Legal Defense Fund. “With McCabe, this day and age, even the appearance of impropriety is a problem … An appearance can be fatal—maybe not to a career—but to advancement.”

This is certainly true of political figures being rumored for the job, Hosko said.

One big name who has taken himself out of the running is former New York Mayor Rudy Giuliani, a Trump supporter in the 2016 race. Giuliani was formerly a U.S. attorney and was known for reducing crime as mayor.

Christie, also a former U.S. attorney known for prosecuting public corruption cases, is reportedly in the running. After ending his own presidential campaign in 2016, Christie quickly endorsed Trump.

“It’s no disrespect to these individuals, but the president shouldn’t nominate anyone who has a clearly partisan background,” Hosko said. “A Christie or Giuliani pick could give the impression that it’s cooked and they will not find anything on Russia.”

Here are other names being discussed as a potential replacement for Comey, according to former FBI agents and news reports:

John Pistole: Not a household name but prominently talked about, Pistole is getting mentioned by news accounts and by former agents as a contender with potentially bipartisan backing. He also has close ties to Vice President Mike Pence, said Nancy Savage, executive director of the Society of Former Special Agents of the FBI, a separate organization from the FBIAA.

“He was a deputy director of the FBI, head of the TSA, and president of a college in Indiana, and maybe close to Pence,” Savage, an agent for more than three decades, told The Daily Signal. “He would be very familiar to all of the issues.”

Pistole, now the president of Anderson University, formerly served in top law enforcement roles for both parties. He was the administrator of the Transportation Security Administration for President George W. Bush and deputy FBI director for Obama. He served for more than 20 years in the FBI before the Senate confirmed him as TSA chief in July 2010.

Condoleezza Rice: The former secretary of state and national security adviser under Bush would seem unlikely, but Savage said her name is being talked about. Such an appointment could come at an interesting time, while the FBI is investigating Russia’s alleged interference in the 2016 election.

“She is a Russian expert, and fiercely independent,” Savage said. “It would be a different move for her.”

Savage said the name was being floated, with the thought it would be a consolation for Garland.

“There is a sentiment about Garland after the Supreme Court, and he does have a strong record as a prosecutor,” Savage said.

President Bill Clinton named Garland as deputy assistant attorney general in the criminal division in 1993. In 1995, Garland led the investigation of the Oklahoma City bombing, and other domestic terrorism cases. Clinton nominated him to serve on the D.C. Circuit Court of Appeals in 1997.

Patrick Fitzgerald: The former U.S. attorney for the Northern District of Illinois became famous and somewhat controversial for investigating both the Valerie Plame leak case as a special prosecutor during the Bush administration and later for his prosecution of Illinois Gov. Rod Blagojevich, a Democrat, on charges of corruption.

Hosko immediately brought up Fitzgerald’s name as a top choice because of his track record for going after both parties.

“Prosecuting Democrats and Republicans is a badge of honor,” Hosko said.

Chuck Rosenberg: The acting administrator of the Drug Enforcement Administration in 2015 would also be a strong candidate with bipartisan appeal, Hosko said. Over his career, he was a federal prosecutor in both Texas and Virginia. He previously served as U.S. attorney for the Southern District of Texas, and later was named as U.S. attorney for the Eastern District of Virginia before working as chief of staff and senior counselor to Comey as FBI director.

Rep. Trey Gowdy: The South Carolina Republican was a former federal prosecutor and is reportedly under consideration. Gowdy chaired the House select committee investigating Benghazi and he has been a member of the House Oversight and Government Reform Committee.

Ray Kelly: Kelly served as the New York City police commissioner following the 9/11 terrorist attacks. He held that job longer than anyone else, and is reportedly under consideration for the FBI job. He backed policies such as stop-and-frisk to reduce crime.