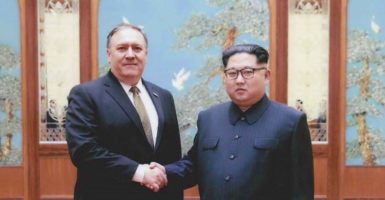 Secretary of State Mike Pompeo’s second trip to Pyongyang was remarkably productive. Not only did he nail down a date and location for the highly anticipated U.S.-North Korea summit, he also managed to secure the release of three American hostages.

Joining Pompeo on the flight back to D.C. were Kim Dong Chul, Tony Kim, and Kim Hak Song—three Americans who were sentenced by North Korea to hard labor on trumped up charges of political crimes.

Kim Dong Chul, a pastor, was convicted of spying in April 2016 and sentenced to 10 years hard labor. Tony Kim and Kim Hak Song, professors at Pyongyang University of Science and Technology, were taken into custody in early 2017. The former was charged with espionage, the latter with “hostile acts.”

Calls to release the three prisoners took on new urgency last year after Americans witnessed the effects of North Korean detention on another American, 22 year-old college student Otto Warmbier. North Korean authorities released him last June, sending him home in a comatose state. He died within days of his arrival.

Warmbier’s tragic death was a wake-up call to many Americans who previously did not know about—or felt removed from—the abuses committed regularly by the North Korean regime.

What is so encouraging about North Korea’s decision to release the three Americans is what it signals: that the regime is not immune from criticism of its human rights record. Their release should embolden U.S. negotiators to raise other pressing human rights issues at the summit.

The U.S. should also take great pains to communicate to North Korea that there will be consequences if the Kim regime should once again take Americans hostage.

The odds of that happening were sharply reduced when the U.S. imposed a travel ban following Warmbier’s return. It greatly discouraged the average traveler from venturing into North Korea.

Still, it is possible that Pyongyang might once again incarcerate Americans still in North Korea if the regime feels it might give it leverage in its dealings with Washington.

It is not sufficient, however, for the Trump administration to address human rights concerns only as they pertain to the regime’s treatment of Americans. After all, Pyongyang authorities continue to hold hostage citizens from Japan and South Korea, our two great regional allies.

Moreover, the regime’s severe abuse of its own people deserves to be more than a footnote in upcoming talks. North Korea’s political prison camps hold 80,000 to 120,000 in captivity—in conditions rivaling those of Nazi Germany’s concentration camps or the Soviet gulags. The U.S. should highlight this aberrant behavior.

Negotiators should consider pressing for humanitarian access to the prisoners in those camps and take steps that encourage North Korea to eventually shutter prison camps for good. It’s a critical issue—literally a matter of life or death for thousands, if not tens of thousands, of North Koreans.

President Donald Trump denounced North Korea’s human rights abuses in his State of the Union address. And Vice President Mike Pence poignantly revived the issue by inviting Warmbier’s father to join him for the opening ceremonies of the Winter Olympics in South Korea.

But the administration has thus far given little indication that human rights will be a topic of discussion at the upcoming summit. South Korea failed to broach the topic during the inter-Korean summit on April 27. The U.S. should not repeat Seoul’s mistake.

Pyongyang’s release of the three prisoners is a positive step—a goodwill gesture that signals a willingness to negotiate at the upcoming summit. However, it is nothing more than that: a first step.

The road to denuclearization is a long one. The road to ridding North Korea of human rights abuses is even longer. But even the longest journey begins with a single step.

The U.S.-North Korea summit offers the opportunity for taking the necessary second step. It is the right moment to raise human rights and communicate to the Kim regime that North Korea will not earn legitimacy if it continues to violate the most basic rights of the North Korean people.