Otto Warmbier Was a Casualty of North Korea. How the US Should Respond to His Death. 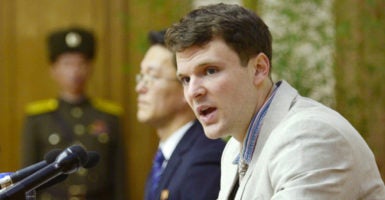 Paul Sung is a member of the Young Leaders Program at The Heritage Foundation.

The world was shocked last week by the death of an American citizen, Otto Warmbier.

Warmbier, who had been detained by North Korean authorities on trumped-up charges for allegedly stealing a propaganda poster, was sentenced to 15 years hard labor.

While serving out his unjust sentence, Warmbier fell into a comatose state, only to die days after returning to the United States after being retrieved by U.S. officials.

Warmbier’s death is representative of the brutality of the Kim regime. The North Korean government is unscrupulous. It routinely abuse its own citizens, and it has little problem harming—even killing, as in the case of Warmbier—citizens of foreign nations.

In the past 21 years, North Korea detained 17 American citizens.

In the years prior, North Korea committed several offenses against U.S. personnel, including seizure of the USS Pueblo in 1968 and torture of the American crew, as well as the axing of two unarmed American soldiers in 1976.

Citizens of other countries have died at the hands of the North Korea, too.

Kidnappings of South Korean and Japanese citizens, the 1983 Myanmar bombing, the 1987 Korean airliner downing, the 2010 sinking of a South Korean ship, and the 2010 shelling of Yeonpyeong claimed the lives of hundreds.

Additionally, North Korea represses its own people. Through North Korea’s own caste system, hundreds of thousands, if not millions, of North Koreans face discriminatory penalties on the basis of their family backgrounds, and many find themselves imprisoned.

A February 2014 human rights report from the United Nations Commission of Inquiry found that between 80,000 and 120,000 people were being held in political prison camps in North Korea.

While Warmbier was eventually returned to the U.S., three other Americans remain in detention in the Hermit Kingdom. Their safe return should be a high priority for the U.S. government.

In light of the threat that North Korea poses to its own citizens and the citizens of other countries, Congress is considering instituting a travel ban, ratcheting up sanctions, and taking a closer look at the North Korean Human Rights Act, which is up for reauthorization.

Such reauthorization would reaffirm the president’s authority to sanction individuals who have perpetrated human rights abuses against the North Korean people.