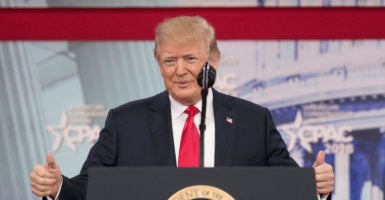 President Donald Trump announced on Friday the “largest package of sanctions yet” on North Korea, targeting an extensive tranche of regime entities who had been thus far untouched by U.S. sanctions.

This action is welcome and is another significant step forward in the international effort to increase pressure on North Korea for its repeated violations of United Nations resolutions and belligerent threats to its neighbors.

While en route to attending the South Korean Olympics, Vice President Mike Pence had telegraphed Friday’s actions by declaring that the U.S. would soon impose the “toughest and most aggressive sanctions yet.” Expectations were high that the U.S. would go beyond its incremental approach toward pressuring the North Korean regime.

As impressive as the list is in length, it is underwhelming in its scope and fails to live up to the hype. Like his predecessors, Trump remains reluctant to go after Chinese financial entities aiding North Korea’s prohibited nuclear and missile programs. Most notably, the U.S. has not targeted Chinese banks and businesses that are violating U.S. laws that protect the American financial system.

Rep. Ed Royce, R-Calif., sent the White House a list of 12 Chinese banks that should be sanctioned, but to date no action has been taken. The U.S. imposed $12 billion in fines on European banks for money laundering for Iran but has yet to impose a fine on any Chinese bank for similar actions on behalf of North Korea.

Using only unclassified information, nongovernment organizations have produced an extensive list of Chinese entities that appear subject to sanctions. It’s not maximum pressure if the Trump administration is still pulling U.S. punches against Chinese violators.

The administration’s focus on shipping and trading companies is a proper response to recent evidence of North Korean ships transferring goods at sea in order to evade detection. But the strategy seems misplaced, since it is a reactive game of maritime whack-a-mole rather than actively targeting the more readily identifiable financial backers. Trump must turn up the heat on Beijing by going after complicit Chinese banks.

Also, why has the Trump administration not sanctioned more North Korean entities for human rights violations?

In his State of the Union address, Trump declared that “no regime has oppressed its own citizens more totally or brutally than the cruel dictatorship in North Korea.” During his speech to the South Korean National Assembly, Trump denounced North Korean leaders who “imprison their people under the banner of tyranny, fascism, and oppression.”

Pence criticized the North Korean regime as “the most tyrannical and oppressive regime on the planet, an evil family clique that brutalizes, subjugates, starves, and imprisons its 25 million people.”

Highlighting the oppression of North Korea is commendable, but the U.S. must follow strong rhetoric with strong actions.