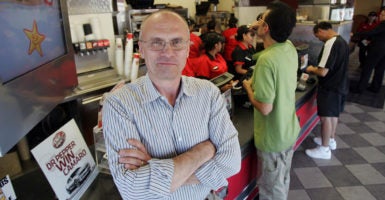 Capitalism and the early success of the Trump presidency is the focus of the new book by Andrew Puzder, former CEO of the Hardee's and Carl's Jr. restaurant chains. (Photo: Ringo Chiu/Zuma Press/Newscom)

Andrew Puzder, former CEO of the parent company of Hardee’s and Carl’s Jr. restaurants, last week spoke to The Daily Signal’s Ginny Montalbano about his new book, “The Capitalist Comeback: The Trump Boom and the Left’s Plot to Stop It.”  President Donald Trump tweeted about the book Friday night. A lightly edited transcript of the interview follows.

Great book just out by very successful businessman @AndyPuzder. Always known as somebody who knows how to win, “Capitalist Comeback” will be a big hit!

Ginny Montalbano: Thank you so much for being with us today. You have a new book out called “The Capitalist Comeback: The Trump Boom and the Left’s Plot to Stop It.” Can you preview it for us?

Andrew Puzder: It’s a book that covers a lot of the history of the progressive movement, and the strength of our American capitalist system, what a benefit it’s been, not only for this country but for the world. But more particularly, how the American dream depends so much on our American free market capitalist system, and how we almost lost it.

We almost lost it after eight years under President Obama, and we would have lost it had we had another eight years under Hillary Clinton. I thought it was important to point out the success that President Trump has had so far, and how he’s really bringing it back. Which is why I call it “The Capitalist Comeback.”

Montalbano: Many millennials dislike capitalism, or they don’t understand it. What would you say to a Bernie Sanders supporter?

Puzder: I’d say you really need to look at what you’re supporting. Capitalism is often mischaracterized as based on greed and socialism, is mischaracterized as not being based on more altruistic conduct. I think if you think about it a little bit, you’d realize that when you’re in business, you are automatically trying to satisfy the needs of others. You’re always trying to satisfy the needs of your customers. You’re trying to bring in new customers. You’re trying to provide them the best value, the best product at the best value.

So what capitalism does is it takes that inherent desire everybody has to improve their lives, or their family’s lives, and it turns into a form of altruistic conduct, because to succeed in your life, to move ahead, you have to meet the needs of others.

In other words, if you’re waiting in line for bread, you want as much bread as you can possibly get before the guy behind you in line [has] a chance to get it. You want to get as much as you possibly can. What you end up with is encouraging people to be greedy. You encourage them to try and take what they can from a limited supply of goods or services that the government creates and provides.

So actually, it’s just the opposite of what kids are being taught in school, in high school and in college. It’s capitalism that really encourages more of an altruistic approach to life, and socialism that really encourages greed. I think the most common comment I’ve got about the book from people who’ve read it is, “I wish we could get it in the hands of kids in high school and college so they could read it, because it really lays out why free enterprise works, and why socialism doesn’t.”

Montalbano: You’re a very successful CEO. You turned around Carl’s Jr. Can you tell us about how you did that, and the lessons you learned?

Puzder: I will. But first of all, I do want to mention that with respect to the book, I’m not keeping the profits on this. It’s not a James Comey attempt to make a bunch of money. I’m going to turn all the profits on the book over to a charity that encourages entrepreneurship in minority communities. So this is about getting the word out, and I hope people will help.

When I took over Carl’s Jr. and Hardee’s, the companies were in very serious debt. We had about half our banks that didn’t work out. It was Hardee’s and Carl’s Jr. that made up CKE Restaurants, and they were both having problems. I fixed it by coming in with a very fresh start.

I came in as someone who looked at the business as a consumer, not as somebody who’d spent his life in the restaurant business, but someone who would walk in a restaurant and say, “What do I want to see? What do I expect in service? What kind of products do I want?” And then organized the team.

This was a very important part. Get the team behind the objectives that I set, being that customer that then went in the restaurants and visited. The public responded very, very positively to that, and we turned [around] the company, got it back into profitability.

Montalbano: Lately, a lot of corporations have been intersecting with politics. What do you make of the left turning on Chick-fil-A?

The companies you’ll see reacting to these protests, the social justice warriors, are really people [and] businesses whose customers are in fact people that would be influenced by these social justice warriors. I think Starbucks tends more to a left-leaning clientele, and therefore to stay in business, to increase their profitability, they have to make a showing for that group of people. I think they’ve recently done that.

Chick-fil-A, on the other hand, leans more right, and I think they’re going to be less concerned about trying to address the issues raised by the left.

Montalbano: You mentioned President Trump. Could you give us some insight into your relationship with him, and how you think his presidency is going so far?

Puzder: I met President Trump during the campaign. I’ve had a number of meetings with him in small groups. He’s a wonderful guy. Matter of fact, every time I see him he’s funny, he’s entertaining, he’s always energetic. He’ll be doing two or three things, but he’s focused on you. He knows why you’re there, and he’s up to speed on what you want to talk about.

After I withdrew my nomination [for secretary of labor] and he really had no reason to call me, he called me just to see how I was doing, and we’ve stayed in touch. I just saw him last January. A very good man. I think he’s a very decent man. I don’t really know him or his personal life that deeply, but I say, in my dealings with him he’s been fair and honest and forthright. I think he’s been incredibly successful.

I think probably the best way to explain that would be to compare the Obama era with the 16 months, or 15 months so far, of the Trump era. When I would do interviews during President Obama’s presidency, I was always very critical of his economic policies. Never critical of the president himself, but I’d criticize his economic policies because I thought they would fail, and in fact they did. GDP [gross domestic product] never got very high. It was about 2.1 percent [growth] after the recession. Should have been 3 to 4 percent. The other 10 recessions ended with 4.3 percent GDP coming out of the recession. We never hit that.

His last quarter in office, GDP [growth] was 1.5 percent. So interviews would go something like, “Andy, people are dropping out of the labor force. People can’t find good-paying jobs. They’re working part time in your restaurant. They’re working minimum wage, entry-level jobs in restaurants. They really shouldn’t be, these are people that are qualified for more. We have to pay them more.”

That’s now totally turned around, in literally 15 months. We’ve now gone to where we have the fewest number of people getting unemployment benefits in 44 years; 44 years where there were fewer people in the labor force. So the fact that we’re down to that number is amazing.

We have more job openings than we’ve ever had in the history of the Bureau of Labor Statistics’ compiling the data. And we have more people working than we’ve ever had. Think about that: More people working, and more job openings, in 15 months. … Within 15 months, capitalism and President Trump have taken us to an economy where the biggest problem facing businesses is finding workers to fill the good-paying jobs that are open. That’s the capitalist comeback. That’s what I talk about in the book.

Puzder: It’s a little bit about what I was talking about earlier. … The only way you can make a profit with an American business is by satisfying other people’s needs, like Steve Jobs and Apple, or Henry Ford and Ford. These aren’t people that are making Fords or iPhones for aristocrats or rich people. They’re making them for everybody. They make them for consumers, for all Americans.

The idea being that you can make a profit if you can improve other people’s lives. That’s not greed. That’s a way that you can take the motivation to improve your life and your family’s life, and you can turn that into conduct that benefits everybody. Socialism, exactly the opposite. You’re competing for a limited amount of goods, a limited amount of services that the government makes available, and you want as much as you can get for yourself. That is not acting in other people’s best interest.

That’s acting in your best interest, which is what people do, and which is why socialism simply doesn’t work. Venezuela is the best modern example. Bernie Sanders in 2011 said, “You can only find the American dream in countries like Venezuela.” Who’s the banana republic now? Well, now people are starving in Venezuela. They’re eating out of trash cans. They can’t get medical care, because socialism doesn’t work.

Montalbano: Thank you so much for joining us.